A rested stem cell is a better stem cell. A bone marrow stem cell donor who has a sleep deficit of as little as four hours results in stem cells that, when injected into a recipient, lose as much as 50 percent of their normal ability. When transplanted, they don’t migrate to where they belong in the bone marrow as well and they produce fewer of the desired new immune system cells. A CIRM-funded team at Stanford worked with mice in the current study, but suggest in a university press release that their findings could have implications for human patients.

“Considering how little attention we typically pay to sleep in the hospital setting, this finding is troubling,” said Asya Rolls, a former postdoctoral scholar at Stanford now at Israeli Institute of Technology. “We go to all this trouble to find a matching donor, but this research suggests that if the donor is not well-rested it can impact the outcome of the transplantation. However, it’s heartening to think that this is not an insurmountable obstacle; a short period of recovery sleep before transplant can restore the donor’s cells’ ability to function normally.”

The team published their work in Nature Communications and the Bioscience Technology web portal picked up the release.

Genetically cleaned up pigs as organ donors. Since pigs have organs similar in size and function to humans, they are often discussed as possible organ donors to overcome the acute organ shortage. One problem: pig cells are full of PERVs—that is porcine endogenous retroviruses. Those viruses, normally inactive for many generations in the pigs, can be activated if transplanted into people. So, the pig donor idea got put on the back burner after some early work in the 1990s uncovered the problem. 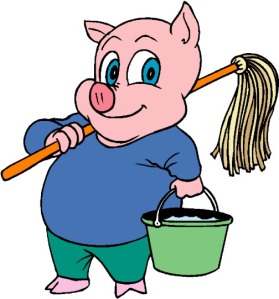 Now, a team in the lab of one my favorite faculty members when I was at Harvard, George Church, has inactivated all 62 PERVs in living pig cells. They used the hot new technology called CRISPR that Church helped to refine. The CRISPR gene-editing tool usually requires a separate molecule for each gene to be edited, but the team was able to use just one identifier molecule because all the PERVs come from one long-ago ancestor and share common DNA.

This major advance will not result in pig hearts for humans on its own. Researchers have to find ways to alter certain of the pig’s own genes that produce proteins that could result in immune system rejection of the organs in humans. Making that gene modification in a way that still results in a living pig will be much more difficult. The research got considerable coverage including in the New York Times and in Genetic Engineering and Biotechnology News.

Clinical trial to use stem cells in the womb. Researchers at Sweden’s Karolinska Institute will begin a clinical trial in January to determine if injecting stem cells into a fetus known to carry the genetic defect for “brittle bone” disease can result in a healthier child. The injection will be at 20 to 34 weeks of pregnancy and be repeated every six months for the child’s first two years of life. Fifteen babies will be treated in the womb and another 15 will begin injections after birth to try to determine if early intervention makes a difference.

The Swedish team gave the therapy to two people some years ago, with one now 13 years old and doing better than most with the genetic disorder that results in most patients suffering dozens of fractures during what is often a shortened life span. But since the disorder presents so differently in each patient, the team felt a clinical trial was needed to determine the impact of in utero therapy.

They will be injecting the cells known as mesenchymal stem cells derived from donated fetal tissue. The upcoming trial for the disease formally known as osteogenesis imperfecta was widely covered including in London’s Daily Star and in the industry newsletter FierceBiotech. 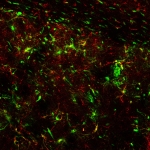 Neural stem cells (green) migrate throughout a brain and mature into astrocytes (red).

Stem cells and Lewy body dementia. The second leading cause of dementia, after Alzheimer’s disease, carries the acronym DLB for Dementia with Lewy Bodies and a team at the University of California, Irvine, thinks they may have a way to improve the lives of people with DLB. They injected nerve stem cells into mice with a form of DLB and saw improvements in both motor function and cognitive skills.

When the Irvine team looked at the effects of the treatment on the brains of the mice they determined that much of the impact came from the stem cells releasing a protective growth factor Brain-Derived Neurotrophic Factor (BDNF). They found benefit on both of the two types of nerve most affected by DLB, dopamine-making nerves and glutamate-making nerves.

“Our experiments revealed that neural stem cells can enhance the function of both dopamine-and glutamate-producing neurons, coaxing the brain cells to connect and communicate more appropriately. This, in turn, facilitates the recovery of both motor and cognitive function,” said lead researcher Natalie Goldberg in a university press release.

To further test the role of BDNF the team injected the growth factor by itself and saw improvement in motor skill but only very limited gain in cognitive skills. So, the stem cells clearly had a role beyond carrying the BDNF pill bottle.