Battling the virus that causes COVID-19 is something that is top of everyone’s mind right now. That’s why CIRM is funding 17 different projects targeting the virus. But one of the most valuable tools in helping develop vaccines against a wide variety of diseases in the past is now coming under threat. We’ll talk about both issues in a live broadcast we’re holding on Wednesday, October 14th at noon (PDT).

That date is significant because it’s Stem Cell Awareness Day and we thought it appropriate to host a meeting looking at two of the most important issues facing the field.

The first part of the event will focus on the 17 projects that CIRM is funding that target COVID-19. This includes three clinical trials aiming to treat people who have been infected with the virus and are experiencing some of the more severe effects, such as damaged lungs.

We’ll also look at some of the earlier stage research that includes:

The impacts could be significant. Fetal tissue has been used for decades to help develop some of the most important vaccines used today including rubella, chickenpox, hepatitis A, and shingles. They have also been used to make approved drugs against diseases including hemophilia, rheumatoid arthritis, and cystic fibrosis.

We’ll look at some of the reasons why we are seeing these potential restrictions on the medical research and what impact they could have on the ability to develop new treatments for the coronavirus and other deadly diseases.

We look forward to seeing you there. 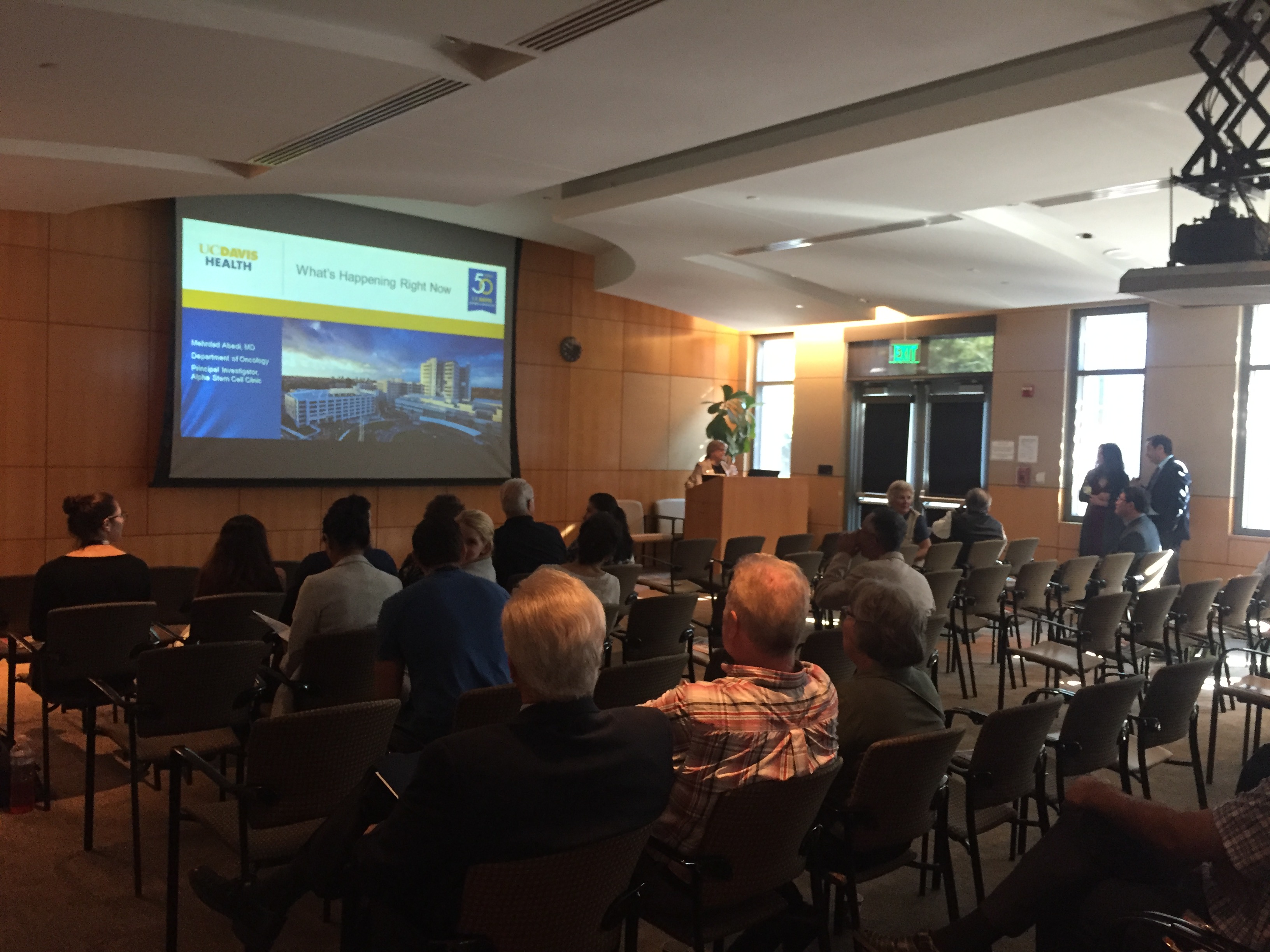 Every year, the second Wednesday in October is set aside as Stem Cell Awareness Day, a time to celebrate the progress being made in the field and to remind us of the challenges that lie ahead.

While the event began here in California in 2008, with then-Governor Arnold Schwarzenegger highlighting the work of CIRM, saying: ”The discoveries being made today in our Golden State will have a great impact on many around the world for generations to come.” It has since grown to become a global event.

Here in California, for example, UC Davis and the University of Southern California (USC) both held events to mark the day.

At UC Davis Jan Nolta, PhD., the Director of the Stem Cell Program, introduced a series of speakers who highlighted the terrific work being done at the university. Peter Belafsky talked about using stem cells to repair damaged trachea and to help people who are experiencing voice or swallowing disorders. Mark Lee highlighted the progress being made in using stem cells to repair hard-to-heal broken bones. Aijun Wang focused on some really exciting work that could one day lead to a therapy for spina bifida (including some ridiculously cute video of English bulldogs who are able to walk again because of this therapy.)

USC hosted 100 local high school students for a panel presentation and discussion about careers in stem cell research. The panel featured four scientists talking about their experience, why the students should think about a career in science and how to go about planning one. USC put together a terrific video of the researchers talking about their experiences, something that can help any student around the US consider becoming part of the future of stem cell research.

Similar events were held in other institutions around California. But the celebration wasn’t limited to the Golden State. At the Texas Heart Institute in Houston, Texas, they held an event to talk to the public about the clinical trials they are supporting using stem cells to help people suffering from heart failure or other heart-related issues.

Finally, the UK-based RegMedNet, a community site that unites the diverse regenerative medicine community, marked the day by exploring some of the myths and misconceptions still surrounding stem cells and stem cell research.

You can read those here.

Every group takes a different approach to celebrating Stem Cell Awareness Day, but each is united by a common desire, to help people understand the progress being made in finding new treatments and even cures for people with unmet medical needs.

In 2008, the then California Governor Arnold Schwarzenegger  declared Sept. 25 to be Stem Cell Awareness Day. In the proclamation he said, ”The discoveries being made today in our Golden State will have a great impact on many around the world for generations to come.” 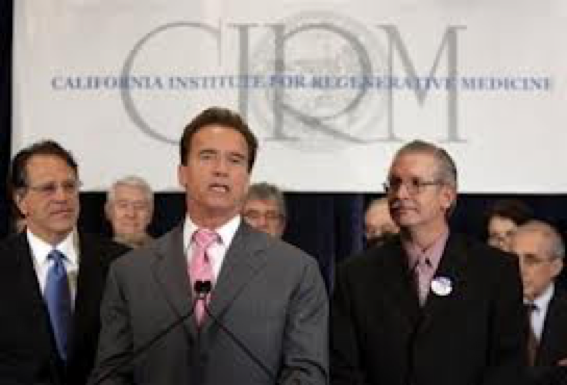 In the years since, we have moved steadily towards turning those words into reality and using Stem Cell Awareness Day, now celebrated on the second Wednesday in October, as a symbol of the progress being made, not just in California but around the world.

Yesterday, for example, at a public event at UC Davis in Sacramento, Dr. Jan Nolta told an audience of patients, patient advocates, researchers and stem cell supporters that “we are part of a new era in medicine, one where it will one day be routine for prescriptions to be written for stem cell treatments for many different diseases.”

Those sentiments were echoed by Jonathan Thomas, Chair of the CIRM Board, who said:

“This is a time of truly extraodinary medical science.  We are lucky because, in our lifetime, we are going to see many of the biggest maladies plaguing people cured, in part because of developments in regenerative medicine. Every week you read about extraordinary developments in medicine and often those are here in California.”

In the early years Stem Cell Awareness Day was very much a creation of CIRM. We worked closely with our partners in academia and industry to host or stage events around the state. In 2009 for example, more than 40 CIRM grantees went to high schools in California, talking about stem cell research to more than 3,000 students. We also coordinated with researchers in Canada and Australia to create a global community of supporters.

We even hosted a poetry competition. No, really, we did. So, clearly not every idea we had back then was a winner.

These days CIRM doesn’t play as prominent a role in organizing these events for a very simple reason. We don’t have to. They have become such a popular part of the scientific calendar that individual institutions and schools organize their own events, without any pushing or prodding from us (though we are always happy to help when asked).

At UC Irvine this afternoon there is an Open House where you can take a self-guided tour of the facility, meet some of the scientists and watch lab demonstrations.

This weekend the UC  Berkeley’s Student Society of Stem Cell Research (SSSCR) is hosting its 5th annual Stem Cell Conference: Culturing a Stem Cell Community. This conference aims to bring together different aspects of stem cell research, from science to advocacy, to demonstrate the growth and success of the field. You can RSVP on Eventbrite (tickets cost a small fee of $7 or $12 including lunch to support the cost of the SSSCR conference)

In the early days of CIRM, Stem Cell Awareness Day was a valuable way for us to talk directly to the people of California – the ones who created CIRM. We felt it was important to let them know how their money was being spend and about the progress being made in stem cell research. And in the early years that progress was slower than all of us would have liked. Today, it’s a very different situation with CIRM now having funded 40 projects in clinical trials (and a goal of funding dozens more in the coming years) and with advances being made every day. We still reach out to our supporters and the patient advocate community but now we do it year round through our blog, social media and public events like the one yesterday at UC Davis.

While we are not as “hands on” as we were in the past we are still more than happy to provide tools for groups or organizations who want to hold their own stem cell awareness event – and it doesn’t have to be on October 11th, it can be any day of the year. Visit our Education Portal, Patient Resources page and video archive for various teaching tools. 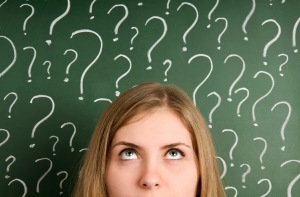 The world is full of skeptics. Remember when you first heard about self-driving cars? I’m sure that information was met with comments like, “When pigs fly!” or “I’ll believe it when I see it!” Well, it turns out that the best way to get people to believe something is possible, is to show them.

And that’s our mission at CIRM. To show people that stem cell research is important and funding it is essential for the development of future therapies that can help patients with all sorts of diseases be they rare, acute, or chronic.

We’re doing this in multiple ways through our Stem Cellar blog and social media channels where we post about the latest advances in regenerative medicine research towards the clinic, through disease walks and support groups where we educate patients about stem cells, and through fun and engaging videos about the cutting-edge research that our agency is funding.

Last month, the world celebrated Stem Cell Awareness Day on October 12th. One of the ways we celebrated at CIRM was to give talks at local institutes about the power of stem cells for research and therapeutic development. One of these talks was at the Buck Institute for Research on Aging in Novato as part of their special public event on “Turning Promise of Regenerative Medicine into Reality” supported by the STEAM ENGINE, the teacher outreach program at the Buck Institute.

Kevin, CIRM’s communicators director, and I did a joint presentation on the different ways that scientists are using stem cells to model disease and to develop new treatments for patients. We also shared a few particularly exciting stories about new stem cell advancements that are being tested in clinical trials. One of them was a heartbreaking turned heartwarming story of Evangelina, a baby born with severe combined immunodeficiency (SCID), a disease that leaves children without a functioning immune system and often kills babies within a year of birth. Evangelina was part of a CIRM-funded clinical trial run by UC Los Angeles that transplanted the patient’s own genetically corrected blood stem cells. Evangelina is one of 30 children the UCLA team has cured and CIRM is now funding a Phase 2 clinical trial for this work.

Our talk was followed by exciting stories of stem cell research in the lab. Three talented postdoctoral fellows, who spoke about new developments in stem cell therapies for HIV, degenerative eye disease and neurodegenerative diseases. The talks were well received by the audience, who were actively speaking up to ask questions during the panel discussion with the speakers. 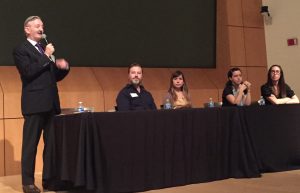 It was a truly inspiring day full of learning and excitement about the future of stem cell research and regenerative medicine. But for the skeptics out there, don’t take my word for it, you can see for yourself by can watching the video recording here: