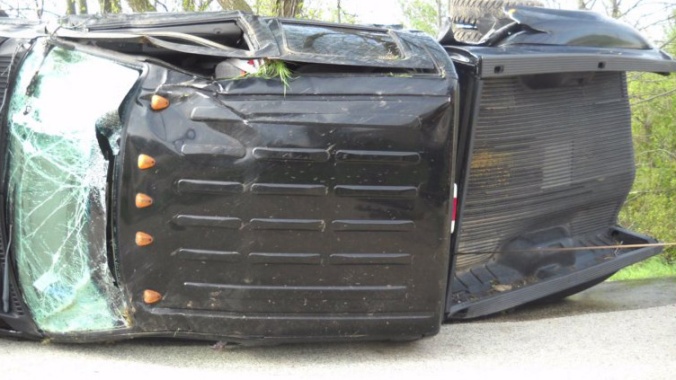 Lucas Lidner was left paralyzed below the chin after a truck accident last May.  Photo: Fox6Now, Milwaukee

On a Sunday morning in early 2016, Lucas Lindner was driving to get some donuts for his grandmother. A deer jumped in front of his truck. Lucas swerved to avoid it and crashed, suffering a severe spinal cord injury that left him paralyzed from the neck down.

Lucas took part in a CIRM-funded clinical trial, becoming just the second person to get 10 million stem cells transplanted into his neck. Since then he has regained some use of his arms and hands. While some patients with spinal cord injuries do experience what is called “spontaneous” recovery, Lucas was not the only person in the trial who experienced an improvement. Asterias Biotherapeutics, the company behind the clinical trial, reported that four of the six patients in the trial “have recovered 2 or more motor levels on at least one side through 12 months, which is more than double the rates of recovery seen in both matched historical controls and published data in a similar population.”

Lucas says his improvement has changed his life.

“I was pretty skeptical after the accident, on being able to do anything, on what was going to happen. But regaining hand function alone gave me everything I pretty much needed or wanted back.”

Lucas can now type 40 words a minute, use a soldering iron and touch his pinkie to his thumb, something he couldn’t do after the accident.

In August of last year Lucas did something else he never imagined he would be able to do, he threw out the first pitch at a Milwaukee Brewers baseball game. At the time, he said “I’m blown away by the fact that I can pitch a ball again.”

Now Lucas has his sights set on something even more ambitious. He is going back to school to study IT.

“When I was in 3rd grade a teacher asked what I want to be and I said a neuro-computational engineer. Everyone laughed at me because no one knew what that meant. Now, after what happened to me, I want to be part of advancing the science, helping make injuries like mine a thing of the past.”

Even though he was one of the first people to take part in this clinical trial, Lucas doesn’t think of himself as a pioneer.

“The real pioneers are the scientists who came up with this therapy, who do it because they love it.”

You can read more about Lucas and other patients who’ve participated in CIRM-funded clinical trials in CIRM’s 2017 Annual Report on our website.

For more about Lucas and his story, watch this video below from Asterias.

Back in March, we reported on Asterias Biotherapeutics’ exciting press release stating that its CIRM-funded stem cell-based therapy for spinal cord injury had shown improvement in six out of the six clinical trial patients receiving a ten million cell dose. What’s even more exciting is hearing stories about the positive impact of that data on specific people’s lives. People like Lucas Lindner of Eden, Wisconsin.

Lucas Lindner was left paralyzed below the chin after a truck accident last May. Photo: Fox6Now, Milwaukee

Just over a year ago, Lucas headed out in his truck on a Sunday morning to pick up some doughnuts for his grandmother. Along the way, he suddenly saw a deer in the road and, in swerving to avoid hitting the animal, Lucas’ truck flipped over. He was thrown through the window and suffered a severe spinal cord injury leaving him without the use of his arms and legs. 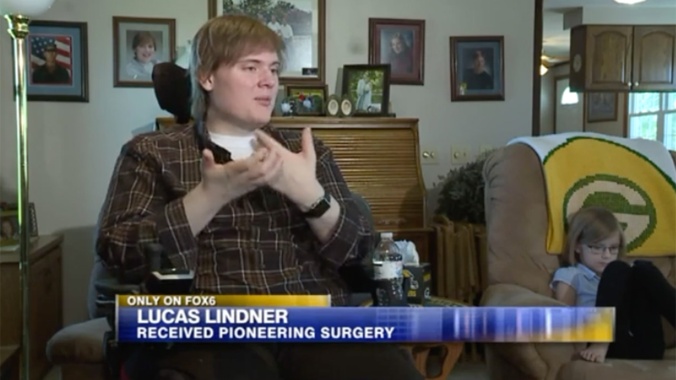 Earlier this month, Lucas was featured in a local Milwaukee TV news report that highlights his incredible recovery since participating in the Asterias trial shortly after his accident. Surgeons at Medical College of Wisconsin – one of the clinical trial sites – injected 10 million AST-OPC1 cells into the site of the spinal cord injury a few inches below his skull. The AST-OPC1 product contains oligodendrocyte progenitor cells, which when fully matured are thought to help restore nerve signaling in the frayed spinal cord nerve cells.

Lucas was just the second person nationally to receive the 10 million cell dose, and since that time, he’s regained movement in his arms, hands and fingers. This improvement may seem moderate to an outside observer, but for Lucas, it’s life changing because it gives him the independence to pursue his dreams of working in the IT and electronics fields:

“Now that I have near 100% full range on all of my fingers, that pretty much brings everything I ever wanted to do back. It lets you contribute to society. Words can’t express how amazing it feels…The future really is limitless,” he said during the TV new segment.

While regaining movement spontaneously without a stem cell treatment is not unheard of, the fact that all six of the trial participants receiving 10 million cells had improvements suggests the stem cell-based therapy is having a positive impact. We’re hopeful for further good news later this year when Asterias expects to provide more safety and efficacy data on participants given the 10 million cell dose as well as others who received the maximum 20 million cell dose.