Stem Cell Photo of the Week

In honor of brain awareness week, our featured stem cell photo is of the brain! Scientists at the Massachusetts General Hospital and Harvard Stem Cell Institute identified a genetic switch that could potentially improve memory during aging and symptoms of PTSD. Shown in this picture are dentate gyrus cells (DGC) (green) and CA3 interneurons (red) located in the memory-forming area of the brain known as the hippocampus. By reducing the levels of a protein called abLIM3 in the DGCs of older mice, the researchers were able to boost the connections between DGCs and CA3 cells, which resulted in an improvement in the memories of the mice. The team believes that targeting this protein in aging adults could be a potential strategy for improving memory and treating patients with post-traumatic stress disorder (PTSD). You can read more about this study in The Harvard Gazette.

New target for obesity.
Fat cells typically get a bad rap, but there’s actually a type of fat cell that is considered “healthier” than others. Unlike white fat cells that store calories in the form of energy, brown fat cells are packed with mitochondria that burn energy and produce heat. Babies have brown fat, so they can regulate their body temperature to stay warm. Adults also have some brown fat, but as we get older, our stores are slowly depleted.

In the fight against obesity, scientists are looking for ways to increase the amount of brown fat and decrease the amount of white fat in the body. This week, CIRM-funded researchers from the Salk Institute identified a molecule called ERRg that gives brown fat its ability to burn energy. Their findings, published in Cell Reports, offer a new target for obesity and obesity-related diseases like diabetes and fatty liver disease.

The team discovered that brown fat cells produce the ERRg molecule while white fat cells do not. Additionally, mice that couldn’t make the ERRg weren’t able to regulate their body temperature in cold environments. The team concluded in a news release that ERRg is “involved in protection against the cold and underpins brown fat identity.” In future studies, the researchers plan to activate ERRg in white fat cells to see if this will shift their identity to be more similar to brown fat cells. 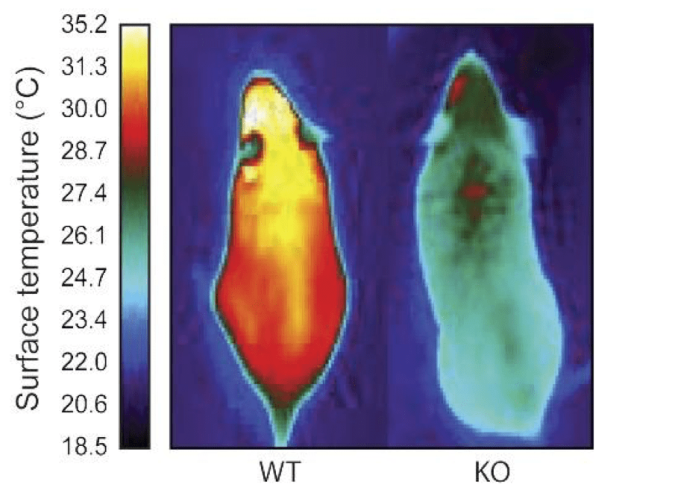 Tale of two nanomedicine stories: making gene therapies more efficient with a bit of caution (Todd Dubnicoff).
This week, the worlds of gene therapy, stem cells and nanomedicine converged for not one, but two published reports in the journal American Chemistry Society NANO.

The first paper described the development of so-called nanospears – tiny splinter-like magnetized structures with a diameter 5000 times smaller than a strand of human hair – that could make gene therapy more efficient and less costly. Gene therapy is an exciting treatment strategy because it tackles genetic diseases at their source by repairing or replacing faulty DNA sequences in cells. In fact, several CIRM-funded clinical trials apply this method in stem cells to treat immune disorders, like severe combined immunodeficiency and sickle cell anemia.

This technique requires getting DNA into diseased cells to make the genetic fix. Current methods have low efficiency and can be very damaging to the cells. The UCLA research team behind the study tested the nanospear-delivery of DNA encoding a gene that causes cells to glow green. They showed that 80 percent of treated cells did indeed glow green, a much higher efficiency than standard methods. And probably due to their miniscule size, the nanospears were gentle with 90 percent of the green glowing cells surviving the procedure.

As Steve Jonas, one of the team leads on the project mentions in a press release, this new method could bode well for future recipients of gene therapies:

“The biggest barrier right now to getting either a gene therapy or an immunotherapy to patients is the processing time. New methods to generate these therapies more quickly, effectively and safely are going to accelerate innovation in this research area and bring these therapies to patients sooner, and that’s the goal we all have.”

While the study above describes an innovative nanomedicine technology, the next paper inserts a note of caution about how experiments in this field should be set up and analyzed. A collaborative team from Brigham and Women’s Hospital, Stanford University, UC Berkeley and McGill University wanted to get to the bottom of why the many advances in nanomedicine had not ultimately led to many new clinical trials. They set out looking for elements within experiments that could affect the uptake of nanoparticles into cells, something that would muck up the interpretation of results.

In this study, they report that the sex of cells has a surprising, noticeable impact on nanoparticle uptake. Nanoparticles were incubated with human amniotic stem cells derived from either males or females. The team showed that the female cells took up the nanoparticles much more readily than the male cells.  Morteza Mahmoudi, PhD, one of the authors on the paper, explained the implications of these results in a press release:

“These differences could have a critical impact on the administration of nanoparticles. If nanoparticles are carrying a drug to deliver [including gene therapies], different uptake could mean different therapeutic efficacy and other important differences, such as safety, in clinical data.”