A lesson that every lab researcher learns early in their career is that experiments often don’t give you the results you expect. But that’s not always a bad thing. Sometimes surprising results can lead to new insights or can even steer your research in completely new, exciting directions.

That’s what happened to scientists at the University of Texas Southwestern Medical Center. What started out as a project to better understand a genetic disorder – called neurofibromatosis – that causes benign tumor growth on nerve cells, turned into new discoveries about the cellular basis for graying and balding hair – at least in mice. 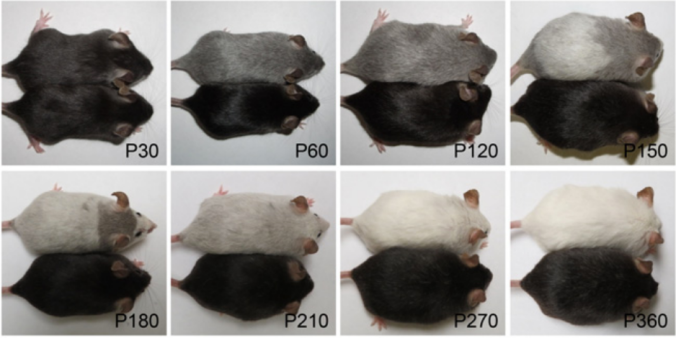 The team was studying neurofibromatosis in mouse cells that produce Krox20, a protein which plays a role in the development of nerve cells. Krox20, in turn, stimulates the production of another protein called Stem Cell Factor (SCF). With some genetic engineering tricks, a mouse strain lacking SCF specifically in these Krox20-producing cells was bred to uncover SCF’s impact on neurofibromatosis. 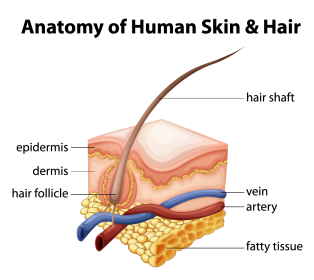 But the researchers couldn’t help noticing something else: as reported in Genes and Development, just a month after birth, all 20 mice had graying fur and by nine months, their fur was completely white. Another set of mice was bred to lack Krox20-producing cells. The resulting animals completely lacked hair. Further experiments determined that the Krox20-producing cells in the hair follicle were stem cell-like progenitor cells that give rise to the cells responsible for hair production and pigmentation.

Piecing the data together, the researchers created a visual model of the hair follicle in which the progenitor cells maintain a steady supply of hair-producing cells with Krox20 playing a critical role. And the SCF produced by those cells allows the uptake of hair pigment called melanin, from nearby melanocyte cells also found in the hair follicle.

This model suggests that as we age, something causes a reduction in SCF in the hair follicle which leads to graying hair. The model also suggests that thinning hair, which is quite common in both men and women, is triggered by a reduction in the number of progenitor cells in the follicle.

Given that the treatment of hair loss and graying are multi-billion dollar industries, it’s no surprise that this story got a lot of attention in the press. Based on the titles of some of those news articles, you’d think new, game-changing hair products are just around the corner. In reality, this research is at a very early stage and will require many years of follow up experiments to figure out if and how commercialization of the technology is possible.

Still, as lead scientist Dr. Lu Le explains in a press release, the team has a vision for what their ultimate goal might look like:

“With this knowledge, we hope in the future to create a topical compound or to safely deliver the necessary gene to hair follicles to correct these cosmetic problems.”