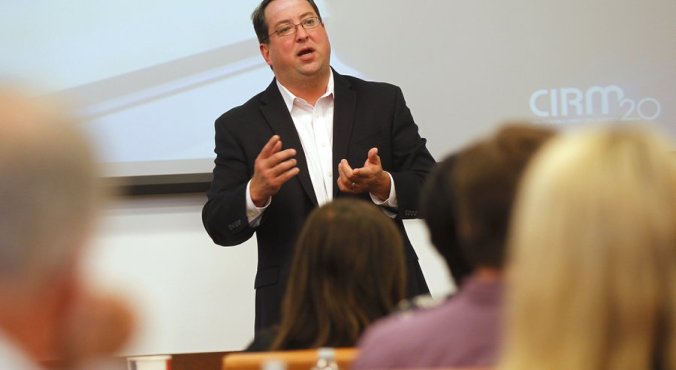 Some news releases are fun to write. Some less so. The one that CIRM posted today definitely falls into that latter group. It announced that CIRM’s President and CEO, Randy Mills, is leaving us to take up the role of President and CEO at the National Marrow Donor Program – NMPD/Be The Match.

It’s a great opportunity for him but a big loss for us.

Randy has been at CIRM since April 2014. In that time he has dramatically re-shaped the agency, and, more importantly, dramatically improved the speed with which we are able to fund research. It’s no exaggeration to say that Randy’s drive to create CIRM 2.0 was a radical overhaul of the way we work. It made it easier for researchers to apply to us for funding, made our funding cycles more consistent and the application process simpler – though no less rigorous.

As our CIRM Board Chair Jonathan Thomas said in the news release:

“CIRM has experienced a remarkable transformation since Randy’s arrival. He has taken the agency to a new level by developing and implementing a bold strategic plan, the results of which include an 82% reduction in approval time for clinical trial projects, a 3-fold increase in the number of clinical trials, and a 65% reduction in the time it takes to enroll those trials. The opportunity for Randy to lead a tremendously important organization such as the NMDP/Be The Match is consistent with the values he demonstrated at CIRM, which put the well-being of patients above all else. We shall miss him but know he will do great things at NMDP/Be The Match.”

From a personal perspective, what most impressed me about Randy was his willingness to involve every person in the agency in changing the way we work. He could easily have come in and simply issued orders and told people what to do. Instead he invited every person at CIRM to sit in on the meetings that were shaping the new direction we took. You didn’t have to go, but if you did you were expected to offer thoughts and ideas. No sitting idly by.

Those meetings not only changed the direction of the agency, they also re-energized the agency. When people feel their voice is being heard, that their opinion has value, they respond by working harder and smarter.

The CIRM of today has the same mission as always – accelerating stem cell treatments to patients with unmet medical needs – but the people working here seem to have a renewed commitment to making that mission a reality.

Randy brought to CIRM energy and a renewed sense of purpose, along with some truly terrible jokes and a strange conviction that he could have been a great rock and roll drummer (suffice to say he made the right career choice when he went into research).

He changed us as an agency, for the better. We shall miss him, but know he will do great things in his new role at NMDP/Be The Match and we wish him success in his new job, and his family great joy in their new home.

Randy will be with us till the end of June and starting July 1st Dr. Maria Millan will take on the role of interim President and CEO.