The TV commercial is nearly 20 years old but I remember it vividly: a couple is driving down a street when they suddenly realize the music on their tape deck is in sync with the repetitive activity on the street. From the guy casually dribbling a basketball to people walking along the sidewalk to the delivery people passing packages out of their truck, everything and everyone is moving rhythmically to the beat.

The ending tag line was, “Sometimes things just come together,” which is quite true. Many of our basic daily activities like breathing and walking just come together as a result of repetitive movement. It’s easy to take them for granted but those rhythmic patterns ultimately rely on very intricate, interconnected signals between nerve cells, also called neurons, in the brain and spinal cord.

Circuitoids: a neural network in a lab dish

A CIRM-funded study published yesterday in eLife by Salk Institute scientists reports on a method to mimic these repetitive signals in a lab dish using neurons grown from embryonic stem cells. This novel cell circuitry system gives the researchers a tool for gaining new insights into neurodegenerative diseases, like Parkinson’s and ALS, and may even provide a means to fix neurons damaged by injury or disease.

A video produced by the Salk Institute (see below), shows some fascinating microscopy visualizations of these circuitoids’ repetitive signals. In the video, team leader Samuel Pfaff explains that changing the ratio of excitatory vs inhibitory neurons had noticeable effects on the rhythm of the nerve impulses:

“What we were able to do is combine different ratios of cell types and study properties of the rhythmicity of the circuitoid. And that rhythmicity could be very tightly control depending on the cellular composition of the neural networks that we were forming. So we could regulate the speed [of the rhythmicity] which is kind of equivalent to how fast you’re walking.”

It’s possible that the actual neural networks in our brains have the flexibility to vary the ratio of the active excitatory to inhibitory neurons as a way to allow adjustments in the body’s repetitive movements. But the complexity of those networks in the human brain are staggering which is why these circuitoids could help: 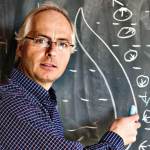 “It’s still very difficult to contemplate how large groups of neurons with literally billions if not trillions of connections take information and process it,” says Pfaff in a press release. “But we think that developing this kind of simple circuitry in a dish will allow us to extract some of the principles of how real brain circuits operate. With that basic information maybe we can begin to understand how things go awry in disease.”