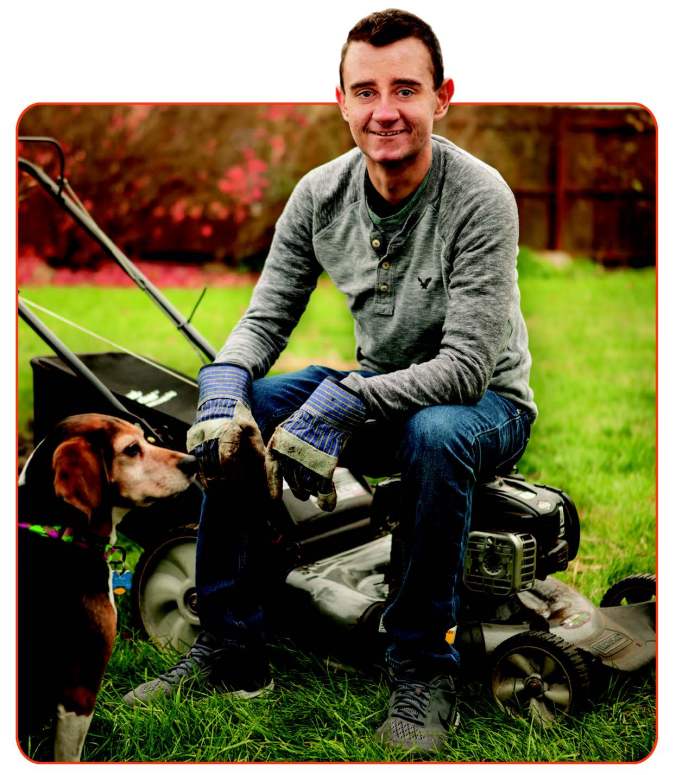 It’s not often you meet someone who says one of their favorite things in the world is mowing the lawn. But then, there aren’t many people in the world like Brenden Whittaker. In fact, as of this writing, he may be unique.

Brenden was born with severe chronic granulomatous disease (x-CGD), a rare genetic disorder that left him with an impaired immune system that was vulnerable to repeated bacterial and fungal infections. Over 22 years Brenden was in and out of the hospital hundreds of times, he almost died a couple of times, and lost parts of his lungs and liver.

Then he became the first person to take part in a clinical trial to treat x-CGD. UCLA researcher Don Kohn had developed a technique that removed Brenden’s blood stem cells, genetically re-engineered them to correct the mutation that caused the disease, and then returned those stem cells to Brenden. Over time they created a new blood system, and restored Brenden’s immune system.

We profiled Brenden for our 2016 Annual Report. Here’s an extended version of the interview we did with him, talking about his life before and after he was cured.

Brenden with a CIRM Game Ball – signed by everyone at CIRM

I still think about it, my disease, every few days or so and it’s weird because in the past I was sick so often; before this year, I was sick consistently for about 5 years and going to doctor’s appointments 2 or 3 times a week and being in the hospital. So, it’s weird having a cough and not having to be rushed to the ER, not having to call someone every time the smallest thing pops up, and not having to worry about what it means.

It’s been good but it’s been weird to not have to do that.  It’s a nice problem to have.

What are you doing now that you didn’t do before?

Cutting the grass is something I couldn’t do before, that I’ve taken up now. Most people look at me as if I’m crazy when I say it, but I love cutting grass, and I wasn’t able to do it for 22 years of my life.

People will complain about having to pick up after their dog goes to the bathroom and now I can follow my dog outside and can pick up after her. It really is just the little things that people don’t think of. I find enjoyment in the small things, things I couldn’t do before but now I can and not have to worry about them.

I was in the boy scouts growing up so I love camping, building fires, just being outdoors. I hiked on the Appalachian Trail. Now I’ll be able to do more of that.

I have a part time job at a golf course and I’m actually getting ready to go back to school full time in January. I want to get into pre-med, go to medical school and become a doctor. All the experience I’ve had has just made me more interested in being a doctor, I just want to be in a position where I can help people going through similar things, and going through all this just made me more interested in it.

Before the last few months I couldn’t schedule my work more than a week in advance because I didn’t know if I was going to be in the hospital or what was going on. Now my boss jokes that I’m giving him plans for the next month or two. It’s amazing how far ahead you can plan when you aren’t worried about being sick or having to go to the hospital.

I’d love to do some traveling. Right now most of my traveling consists of going to and from Boston (for medical check-ups), but I would love to go to Europe, go through France and Italy. That would be a real cool trip. I don’t need to see everything in the world but just going to other countries, seeing cities like London, Paris and Rome, seeing how people live in other cultures, that would be great.

I do think about the fact that when I was born one in a million kids were diagnosed with this disease and there weren’t any treatments. Many people only lived a few years. But to be diagnosed now you can have a normal life. That’s something all on its own. It’s almost impossible for me to fathom it’s happening, after all the years and doctor’s appointments and illnesses.

So, for people going through anything like this, I’d say just don’t give up. There are new advances being made every day and you have to keep fighting and keep getting through it, and some day it will all work out.