The beauty of pharmaceutical drugs is their stability. Those ibuprofen pills in your medical cabinet can sit there for weeks, months, even years but still dull a sudden headache.

Stem cell-based therapies don’t have that luxury because, well, they’re made of living cells. Outside of the body, cells are the opposite of stable. To keep them alive and active, they need to be maintained in a precise mix of liquid nutrients and in a controlled environment of 98.6F with 5% oxygen, or frozen.

Fragile: handle with care
This tight set of conditions makes the processing, storage and transport of cell therapies to doctors and their patients tricky. Studies have shown that frozen bone marrow-derived stem cells start dying within two hours after thawing. Refrigerating them instead isn’t much better. In that case, cells could be stably held for 6-8hr. These methods don’t leave much time for carrying out the logistics of cell-based treatments and leave questions about the actual dose of intact cells in each treatment batch.

Based on a new report in Stem Cells Translational Medicine, scientists at Newcastle University in the UK have identified a method for improving the shelf-life of stem cells. This finding could go a long way toward lengthening the time window that a cell therapy dose remains intact which in turn will help lower manufacturing and treatment costs.

Sushi just got even better
The team focused on stem cells found in human adipose, or fat, tissue. These human adipose stem cells (hASCs) are a good source of mesenchymal stem cells (MSCs) which are known for their anti-inflammatory and wound healing effects, among other things. The team tested the impact on cell stability when storing them in alginate, a gel-like substance found in seaweed. They ran the test over three days at various temperatures ranging from about 40F to 75F. Here’s a 60 second video showing the alginate technique:

The tests showed that when stored in alginate between 52F and 66F, greater than 70% of the cells were recovered after three days with a max recovery of 86% at 59F. That 70% number threshold looms large because it’s the Food and Drug Administration’s (FDA) minimum acceptable recovery rate for cellular products. In comparison, none of the cell batches stored without alginate reached a 70% recovery no matter which temperature was tested.

The hASCs stored in alginate not only survived well they also functioned just as well as the cells stored without alginate. When transferred back to petri dishes, they still had the capacity to divide and their ability to be specialized into fat, bone and cartilage cells remained intact.

So what exactly is the “secret sauce” behind alginate’s protective effect? A Newcastle University press release summarized the teams’ idea of how the alginate “stem gel” works:

“They believe it may be acting like a corset, preventing the stem cell from expanding and being destroyed, a process known as lysing – which would normally occur within a day when unprotected cells are stored in their liquid state.”

Stem cell Band-Aid
And because the cells survived well even at room temperature while embedded in the alginate, the team has developed an exciting application, which Che Connon, the team’s leader and professor of tissue engineering, explained in the press release:

“This has lots of advantages and applications. For example, we have used them to make a bandage which contains human stem cells which could be applied to a wound such as an ulcer or burn to speed up the healing process.” 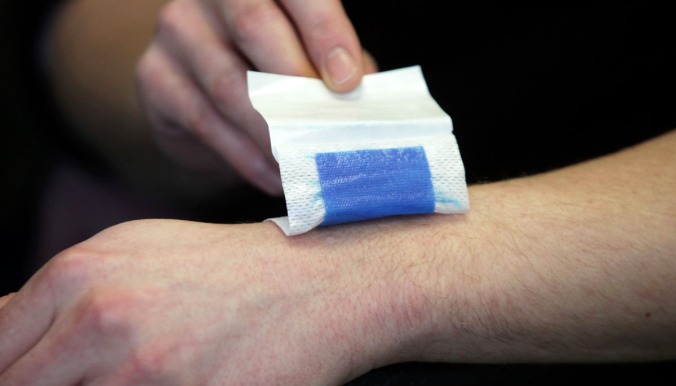 The big picture
Although it may not be as glamorous as finding a cell therapy cure for a deadly disease, this alginate storage technique and others like it become critical for keeping the cell therapy supply chain streamlined, quality-controlled and cost-effective – especially as more and more stem cell-based clinical trials come on line and begin reaching approval for the general population.

One thought on “Sushi Just Got Even Better: Gel Made from Seaweed Improves the Shelf-Life of Stem Cells”