Parkinson’s clinical trials back on track.
After nearly 20 years of being stuck on the clinical trial “bookshelf”, an international team from Cambridge, UK revived a cell therapy for Parkinson’s disease.

In an announcement picked up this week by the Genetic Literacy Project, the team reported they had treated their first patient. Specifically, fetal brain cells were injected into the brain of a man in his mid-50’s with the disease. 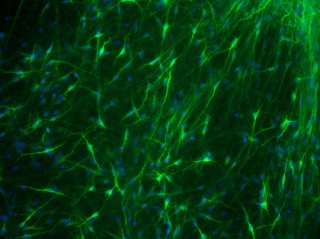 A fluorescent microscopic image of numerous dopaminergic neurons (the type of neurons that are degenerated in Parkinson’s disease patients) generated from human embryonic stem cells. Image courtesy of the Xianmin Zeng lab at the Buck Institute for Age Research.

In Parkinson’s, nerve cells controlling movement die for poorly understood reasons. An accumulation of data through the 60’s and 70’s suggested transplantation of fetal brain cells into the Parkinson’s brain would replace the lost nerve cells and restore movement control. After initial promising results in the 80’s and 90’s, larger clinical trials showed no significant benefit and even led to a worsening of symptoms in some patients.

Due to these outcomes, the research community shelved the approach. Insights gained in the interim pointed to more ideal brain injection sites in order to help avoid side effects. Also, follow up on patients beyond the two-year run of those early trials suggested that positive effects of the cell therapy may not emerge for at least three to five years. So this latest trial will run longer to capture this time window.

One remaining snag for this therapeutic strategy is the limited number of available cells for each transplant. So in the meantime, scientists including some of our grantees are working hard at getting embryonic stem cell- or iPS cell-based therapies to the clinic. Since stem cells divide indefinitely, this approach could provide an off-the-shelf, limitless supply of the nerve cells. Stay tuned.

Targeting cancer stem cells with the Wonder Drug.
Aspirin: it’s the wonder drug that may turn out to be even more wonderful.

Famous for relieving pain and preventing heart attacks, aspirin may add breast cancer-killer to its resume. This week a cancer research team at the Kansas City (Mo.) Veteran Affairs Medical Center published experiments picked up by Eureka Alert showing a daily dose of aspirin could put the brakes on breast cancer.

The analysis attributed this anti-cancer effect to aspirin’s capacity to reduce the growth of cancer stem cells. These cells make up a tiny portion of a tumor but if chemotherapy or radiation treatment leaves any behind, it’s thought the cells’ stem cell-like ability for unlimited growth drives cancer relapse and spread (metastasis).

In the study, mice with tumors given a daily low dose of aspirin for 15 days had, on average, tumors nearly 50% smaller than the aspirin-free mice. In another set of experiments, the team showed aspirin could prevent tumors as well. Mice were given aspirin for 10 days before exposing them to cancer cells. After another 15 days, the aspirin treated animals had significantly less tumor growth compared to an untreated group.

Senior author Sushanta Banerjee stands behind these findings: he’s been taking an aspirin a day for three years but stresses that you should consult with your doctor before trying it yourself.

A stem cell link to the passing on of obesity from mom to child?
It’s been observed that children of obese moms have a high risk for obesity and diabetes. You might conclude that genetics are the culprit as well as lifestyle habits passed down from parent to child. But research published this week by researchers at the University of Colorado School of Medicine suggests another mechanism: they conclude the mere presence of the growing embryo in the uterus of an obese mother may instruct the child’s cells to take on more fat.

The team’s reasoning is based on an analysis of umbilical cord blood stem cells collected from babies born to 12 obese mothers and 12 normal weight mothers. In the lab, the stem cells were specialized into fat and muscle cells. The cells from babies of obese mothers showed increased fat accumulation and a lower production of proteins important for uptake of blood sugar (a state that could eventually tip the scales towards diabetes).

Certainly it’s a leap to link the property of cells in a dish to the eventual health of a child. But the results are intriguing enough that the researchers intend to follow the children as they get older to look for more connections between the state of the kids’ stem cells and their health profile.