The human stomach can be a delicate organ. For example, even the healthiest stomach can be compromised by H. pylori bacteria—a tiny but ruthless pathogen which has shown to be linked to both peptic ulcer disease and stomach cancer.

The best way to study how an H. pylori infection leads to conditions like cancer would be to recreate that exact environment, right down to the stomach itself, in the lab. But that task has proven far more difficult than originally imagined. 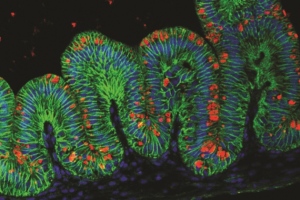 But now, scientists at the Cincinnati Children’s Hospital Medical Center and the University of Cincinnati College of Medicine have successfully grown functional, human stomach tissue in a dish—the first time such a feat has been accomplished.

Further, they were then able to test how human stomach tissue reacts to an invasion by H. pylori—a huge leap forward toward one day developing treatments for potentially deadly stomach disease.

Reporting in today’s issue of the journal Nature, senior author Jim Wells describes his team’s method of turning human pluripotent stem cells into stomach cells, known as gastric cells. Wells explained the importance of their breakthrough in a news release:

“Until this study, no one had generated gastric cells from human pluripotent stem cells. In addition, we discovered how to promote formation of three-dimensional gastric tissue with complex architecture and cellular composition.”

The team called this stomach tissue gastric organoids, a kind of ‘mini-stomach’ that mimicked the major cellular processes of a normal, functioning human stomach. Developing a human model of stomach development—and stomach disease—has long been a goal among scientists and clinicians, as animal models of the stomach did not accurately reflect what would be happening in a human stomach.

In this study, the research team identified the precise series of steps that can turn stem cells into gastric cells. And then they set these steps in motion.

Over the course of a month, the team coaxed the formation of gastric organoids that measured less than 1/10th of one inch in diameter. But even with this small size, the team could view the cellular processes that drive stomach formation—and discover precisely what happens when that process goes awry.

But what most intrigued the researchers, which also included first author University of Cincinnati’s Kyle McCracken, was how quickly an H. pylori infection impacted the health of the stomach tissue.

“Within 24 hours, the bacteria had triggered biochemical changes in the organ,” said McCracken.

According to McCracken, as the H. pylori infection spread from cell to cell, the researchers also recorded the activation of c-Met, a gene known to be linked to stomach cancer—further elucidating the relationship between H. pylori and this form of stomach disease.

Somewhat surprisingly, little was known about how gastric cells play a role in obesity-related diseases, such as type 2 diabetes. But thanks to Wells, McCracken and the entire Cincinnati Children’s research team—we are that much closer to shedding light on this process.

Wells also credits his team’s reliance on years of preliminary data performed in research labs around the world with helping them reach this landmark:

“This milestone would not have been possible if it hadn’t been for previous studies from many other basic researchers on understanding embryonic organ development.”