Stem cells create retina in a dish. A team at Johns Hopkins has shown again that stem cells and their offspring are pretty smart critters. A number of teams have shown that if you direct stem cells to become intermediate, or progenitor cells, of a desired tissue and then place them in the right environment they know how to make all the different types of cells needed to make part of a complex organ. The Hopkins team created retinal tissue in a lab dish that was able to sense and react to light. The tissue they created seemed to self assemble into several of the seven cell types found in a retina and, in particular, create the “rod” cells needed to sense light. They published their results in Nature Communication on line June 10 and Science Daily ran a story on the work. You can read about CIRM-funded projects in the field on our stem cells and blindness fact sheet. 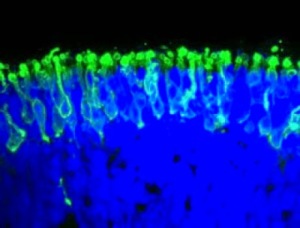 Rod photoreceptors (in green) within a “mini retina” derived from human stem cells in the lab. Image courtesy of Johns Hopkins Medicine

Time-lapse images shows problems in growing cells. For all the potential of pluripotent stem cells, with their ability to become and repair any tissue in the body, one of the biggest bottlenecks to reaping their potential is getting them to grow consistently in the lab. When grown in culture many of them die, and those that survive tend to gain mutations and grow at varying speeds. In any given lab dish, some the most successful cells, the ones that divide most rapidly take on some characteristics of cancer cells. It has been very difficult to parse out the underlying differences in cells that have such different growth rates. So, a team at the University of Sheffield in the U.K. turned a time-lapse camera on single cells in the dish. They found variations in three parameters of growth that should point researchers toward ways to get more uniform, desired growth patterns with their stem cells. They published their work in June 12 online in Stem Cell Reports and HEALTHCANAL picked up the university’s press release.

Moratorium lifted on fetal cells for Parkinson’s. After the first Parkinson’s patient received a transplant of fetal nerve cells in 1987, over the next decade or so more than 100 patients received similar transplants. But the various teams used such varying cell mixtures, injection procedures and other protocols no one could make sense of the results. Some patients appeared to do better, some seemed to have no benefit and a few developed side effects. So, the field adopted a voluntary moratorium on the procedure in 2003 hoping they could go back to the lab and parse out what might be a successful protocol. They think they have now created a viable option and an international collaboration including teams in the U.S., the U.K., Europe and Japan will begin a new clinical trial using the protocol next month. The news section of the journal Nature ran a story about the decision to move forward June 11. You can read about our projects in the field on our Parkinson’s Disease Fact Sheet.

Gene editing to close door on HIV. CIRM has two teams working on using gene editing of stem cells to cure HIV. One has begun a clinical trial and one hopes to begin a trial later this year. While many media outlets have given some coverage to the concept of using gene editing to create T cells—the main target of HIV—that are immune to its infection, it was nice to see one of the leading web portals The Daily Beast go into some detail about how the potential therapy might work. They talk with a researcher from the University of California, San Francisco using an editing technology known as CRSPR, which is new and generating much excitement these days. Our two teams are using other technologies, but in essence all of them hope to give patients T cells that won’t let the virus infect them by mutating the entryway on the cell surface the virus uses like a key to a door. We like having multiple shots on goal when so many lives are at stake, so having three gene editing tools aimed at this unmet medical need is great.

One thought on “Stem Cell Stories that Caught our Eye: Lab Grown Retinas, Restart of Parkinson’s Trial and HIV”