At CIRM we are modest enough to know that we can’t do everything by ourselves. To succeed we need partners. And in UC Davis we have a terrific partner. The work they do in advancing stem cell research is exciting and really promising. But it’s not just the science that makes them so special. It’s also their compassion and commitment to caring for patients.

What follows is an excerpt from an article by Lisa Howard on the work they do at UC Davis. When you read it you’ll see why we are honored to be a part of this research.

UC Davis’ commitment to stem cell and gene therapy research dates back more than a decade.

In 2016, led by Fred Meyers, a professor in the School of Medicine, UC Davis launched the Center for Precision Medicine and Data Sciences, bringing together innovations such as genomics and biomedical data sciences to create individualized treatments for patients.

Led by Jan Nolta, a professor of cell biology and human anatomy and the director of the UC Davis Institute for Regenerative Cures, the new center leverages UC Davis’ network of expert researchers, facilities and equipment to establish a center of excellence aimed at developing lifelong cures for diseases.

Nolta began her career at the University of Southern California working with Donald B. Kohn on a cure for bubble baby disease, a condition in which babies are born without an immune system. The blood stem cell gene therapy has cured more than 50 babies to date.

Work at the UC Davis Gene Therapy Center targets disorders that potentially can be treated through gene replacement, editing or augmentation.

“The sectors that make up the core of our center stretch out across campus,” said Nolta. “We work with the MIND Institute a lot. We work with the bioengineering and genetics departments, and with the Cancer Center and the Center for Precision Medicine and Data Sciences.”

Several cell and gene therapies have progressed to the point that ongoing clinical trials are being conducted at UC Davis for diseases, including sickle-cell anemia, retinopathy, muscle injury, dysphasia, advanced cancer, and Duchenne muscular dystrophy, among others.

“Some promising and exciting research right now at the Gene Therapy Center comes from work with hematopoietic stem cells and with viral vector delivery,” said Nolta.

“We are genetically engineering a patient’s own blood stem cells with genes that block HIV infection,” said Joseph Anderson, an associate professor in the UC Davis Department of Internal Medicine. The clinical trial is a collaboration with Mehrdad Abedi, the lead principal investigator.

“When the patients receive the modified stem cells, any new immune system cell, like T-cell or macrophage, that is derived from one of these stem cells, will contain the HIV-resistant genes and block further infection,” said Anderson.

He explained that an added benefit with the unique therapy is that it contains an additional gene that “tags” the stem cells. “We are able to purify the HIV-resistant cells prior to transplantation, thus enriching for a more protective cell population.

Kyle David Fink, an assistant professor of neurology at UC Davis, is affiliated with the Stem Cell Program and Institute for Regenerative Cures. His lab is focused on leveraging institutional expertise to bring curative therapies to rare, genetically linked neurological disorders.

“We are developing novel therapeutics targeted to the underlying genetic condition for diseases such as CDKL5 deficiency disorder, Angelman, Jordan and Rett syndromes, and Juvenile Huntington’s disease,” said Fink.

The lab is developing therapies to target the underlying genetic condition using DNA-binding domains to modify gene expression in therapeutically relevant ways. They are also creating novel delivery platforms to allow these therapeutics to reach their intended target: the brain.

“The hope is that these highly innovative methods will speed up the progress of bringing therapies to these rare neurodegenerative disease communities,” said Fink. 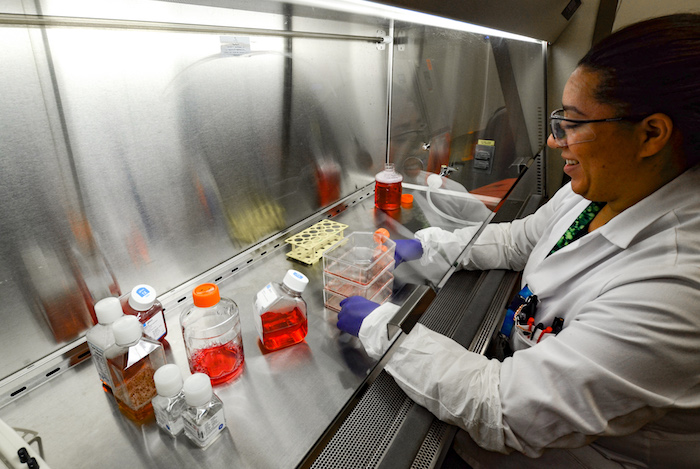 Among Nolta’s concerns is how expensive gene therapy treatments can be.

“Some of the therapies cost half a million dollars and that’s simply not available to everyone. If you are someone with no insurance or someone on Medicare, which reimburses about 65 percent, it’s harder for you to get these life-saving therapies,” said Nolta.

To help address that for cancer patients at UC Davis, Nolta has set up a team known as the “CAR T Team.”

Chimeric antigen receptor (CAR) T-cell therapy is a type of immunotherapy in which a patient’s own immune cells are reprogrammed to attack a specific protein found in cancer cells.

“We can develop our own homegrown CAR T-cells,” said Nolta. “We can use our own good manufacturing facility to genetically engineer treatments specifically for our UC Davis patients.”

Although safely developing stem cell treatments can be painfully slow for patients and their families hoping for cures, Nolta sees progress every day. She envisions a time when gene therapy treatments are no longer considered experimental and doctors will simply be able to prescribe them to their patients.

“And the beauty of the therapy is that it can work for the lifetime of a patient,” said Nolta.

2 thoughts on “Partners in health”