Stem cell image of the week:  New Research out of the Salk Institute could bring us closer to reprogramming stem cells without taking them out of the body (Adonica Shaw)

Our stem cell image of the week could be a step towards reprogramming cells in vivo.

The image represents the first proof of principle for the successful regeneration of a functional organ (the skin) inside a mammal, by a technique known as AAV-based in vivo reprogramming. Epithelial (skin) tissues were generated by converting one cell type (red: mesenchymal cells) to another (green: basal keratinocytes) within a large ulcer in a laboratory mouse model. 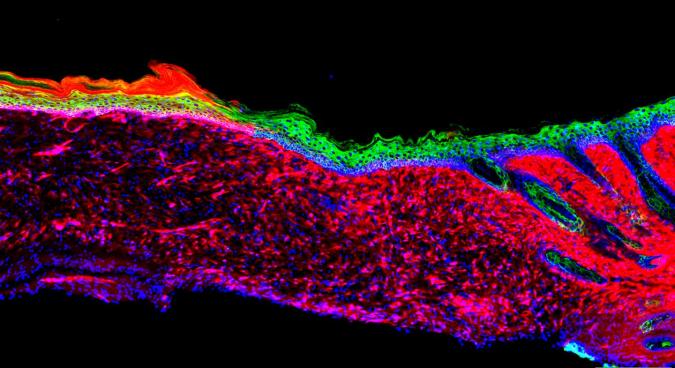 Photo courtesy of the Salk Institute

In large patches of ulcerous skin, surviving cells prioritize inflammation and wound closure. That’s what they’re programmed to do. Cells, on the other hand, can be reprogrammed in living tissue, wounded tissue, to expedite healing.

A group of scientists at the Salk Institute developed a new approach to cellular reprogramming. They found a way to directly convert the cells in an open wound into new skin cells. Their findings were published on Wednesday in Nature.

Reprogramming wound-resident cells could be useful for healing skin damage, countering the effects of aging, and helping us to better understand skin cancer. It could also supplant plastic surgery and the application of skin grafts as a way to treat large cutaneous ulcers, including those seen in people with severe burns, bedsores, or chronic diseases such as diabetes.

When an ulcer is especially large, it can be difficult for surgeons to graft enough skin. In these cases, researchers can isolate skin stem cells from a patient, grow them in the lab and transplant them back into the patient. However, such a procedure requires an extensive amount of time, which may put the patient’s life at risk and is sometimes not effective.

“Our observations constitute an initial proof of principle for in vivo regeneration of an entire three-dimensional tissue like the skin, not just individual cell types as previously shown,” says Dr. Izpisua Belmonte. “This knowledge might not only be useful for enhancing skin repair but could also serve to guide in vivo regenerative strategies in other human pathological situations, as well as during aging, in which tissue repair is impaired.”

Positive news from a CIRM-funded clinical trial targeting a deadly blood cancer. (Kevin McCormack)  Multiple myeloma is a type of blood cancer where certain cells in the bone marrow grow out of control, crowding out the healthy cells and forming tumors. There is no cure but there are many treatments that can slow down or even halt the progression. Over time, however, many of those treatments lose their effectiveness and the cancer returns. Now a new CIRM-funded clinical trial targeting this kind of relapsing multiple myeloma is showing promise.

The trial, by Poseida Therapeutics, takes an immunotherapy approach that uses the patient’s own engineered immune system T cells to seek and destroy the myeloma cells. This product, called P-BCMA-101, is a stem cell memory chimeric antigen receptor T-cell (CAR-T).

In the first eleven patients treated there were no serious side effects and only one patient had a suspected case of cytokine release syndrome. That’s where large amounts of cytokines, immune substances, are rapidly released into the body causing fever, nausea, rapid heartbeat etc. However, even in this patient the symptoms quickly passed.

In a news release, Eric Ostertag, the CEO of Poseida said that even though the goal of this Phase 1 study was just to make sure it was safe and to identify the best dose to give patients, they have already seen a very good partial response in some patients.

“We believe our advantages of a purified product, where all cells express the CAR molecule, and a product with high levels of stem cell memory T cells, producing a more gradual and prolonged immune response against tumor cells, provide a significantly better therapeutic index when compared with other CAR-T therapeutics. We are also encouraged that P-BCMA-101 is demonstrating significant efficacy even at doses that have been ineffective for other anti-BCMA CAR-T therapies and that our response rates continue to improve as the dose increases.”

The clinical trial will eventually treat 40 patients with relapsing or remitting multiple myeloma and we will bring more results as they become available.

Techniques used in ecology help rewrite basic fact about blood stem cells (Todd Dubnicoff) It’s been over half a century since the first blood stem cell transplantation was performed. And yet, some fundamental facts about these cells – which give rise to all the cell types of our blood – have remained cloudy, like the number of blood stem cells present in the human body. This week, researchers at Wellcome Sanger Institute and Wellcome – MRC Cambridge Stem Cell Institute report that they’ve cleared up this long-lasting question. 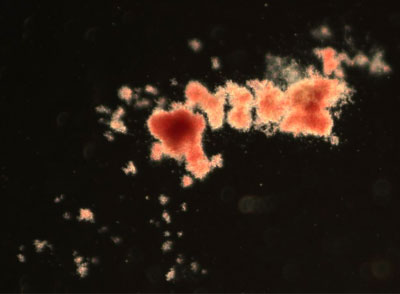 And the results were surprising. Using whole genome DNA sequencing and techniques found in ecology for tracking population sizes, the team determined that a healthy adult has between 50,000 and 200,000 blood stem cells at any given time. That’s about 10 times more than what was previously thought.

Dr. David Kent, a co-senior author on the report, described the implications of this discovery in a press release:

“This new approach is hugely flexible. Not only can we measure how many stem cells exist, we can also see how related they are to each other and what types of blood cells they produce. Applying this technique to samples from patients with blood cancers, we should now be able to learn how single cells outcompete normal cells to expand their numbers and drive a cancer.”

The study was published in Nature.