Do we know how to pick ‘em or what? For a number of years now we have been funding the work of Stanford’s Dr. Marius Wernig, who is doing groundbreaking work in helping advance stem cell research. Just how groundbreaking was emphasized this week when he was named as the winner of the 2018 Ogawa-Yamanaka Stem Cell Prize. 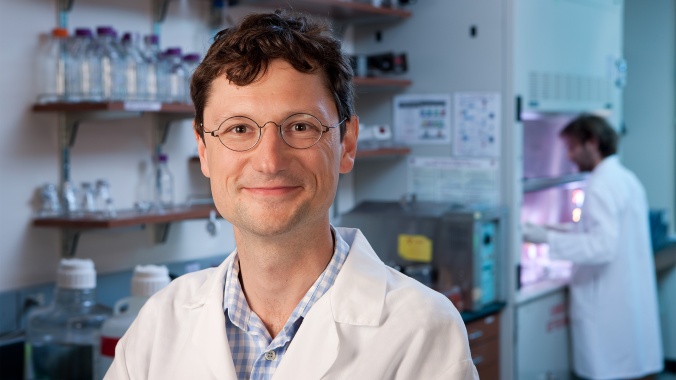 The prestigious award, from San Francisco’s Gladstone Institutes, honors Wernig for his innovative work in developing a faster, more direct method of turning ordinary cells into, for example, brain cells, and for his work advancing the development of disease models for diseases of the brain and skin disorders.

Dr. Deepak Srivastava, the President of Gladstone, announced the award in a news release:

“Dr. Wernig is a leader in his field with extraordinary accomplishments in stem cell reprogramming. His team was the first to develop neuronal cells reprogrammed directly from skin cells. He is now investigating therapeutic gene targeting and cell transplantation–based strategies for diseases with mutations in a single gene.”

Wernig was understandably delighted at the news:

“It is a great honor to receive this esteemed prize. My lab’s goal is to discover novel biology using reprogrammed cells that aids in the development of effective treatments.”

Wernig will be presented with the award, and a check for $150,000, at a ceremony on Oct. 15 at the Gladstone Institutes in San Francisco.

It was a tooth trifecta among stem cell scientists this week. At Tufts University School of Medicine, researchers made an important advance in the development of bioengineered teeth. The current standard for tooth replacement is a dental implant. This screw-shaped device acts as an artificial tooth root that’s inserted into the jawbone. Implants have been used for 30 years and though successful they can lead to implant failure since they lack many of the properties of natural teeth. By implanting postnatal dental cells along with a gel material into mice, the team demonstrated, in a Journal of Dental Research report, the development of natural tooth buds. As explained in Dentistry Today, these teeth “include features resembling natural tooth buds such as the dental epithelial stem cell niche, enamel knot signaling centers, transient amplifying cells, and mineralized dental tissue formation.”

Another challenge with the development of a bioengineered tooth replacement is reestablishing nerve connections within the tooth, which plays a critical role in its function and protection but doesn’t occur spontaneously after an injury. A research team across the “Pond” at the French National Institute of Health and Medical Research, showed that bone marrow-derived mesenchymal stem cells in the presence of a nerve fiber can help the nerve cells make connections with bioengineered teeth. The study was also published in the Journal of Dental Research.

And finally, a research report about stem cells and the dreaded root canal. When the living soft tissue, or dental pulp, of a tooth becomes infected, the primary course of action is the removal of that tissue via a root canal. The big downside to this procedure is that it leaves the patient with a dead tooth which can be susceptible to future infections. To combat this side effect, researchers at the New Jersey Institute of Technology report the development of a potential remedy: a gel containing a fragment of a protein that stimulates the growth of new blood vessels as well as a fragment of a protein that spurs dental stem cells to divide and grow. Though this technology is still at an early stage, it promises to help keep teeth alive and healthy after root canal. The study was presented this week at the National Meeting of the American Chemical Society.

Here’s an animated video that helps explain the research:

One thought on “Stem cell stories that caught our eye: CIRM-funded scientist wins prestigious prize and a tooth trifecta”