How stem cell research gives patients hope (Karen Ring).
You can learn about the latest stem cell research for a given disease in seconds with a quick google search. You’ll find countless publications, news releases and blogs detailing the latest advancements that are bringing scientists and clinicians closer to understanding why diseases happen and how to treat or cure them.

But one thing these forms of communications lack is the personal aspect. A typical science article explains the research behind the study at the beginning and ends with a concluding statement usually saying how the research could one day lead to a treatment for X disease. It’s interesting, but not always the most inspirational way to learn about science when the formula doesn’t change.

However, I’ve started to notice that more and more, institutes and organizations are creating videos that feature the scientists/doctors that are developing these treatments AND the patients that the treatments could one day help. This is an excellent way to communicate with the public! When you watch and listen to a patient talk about their struggles with their disease and how there aren’t effective treatments at the moment, it becomes clear why funding and advancing research is important.

We have a great example of a patient-focused stem cell video to share with you today thanks to our friends at Americans for Cures, a non-profit organization that advocates for stem cell research. They posted a new video this week in honor of Stem Cell Awareness Day featuring patients and patient advocates responding to the question, “What does stem cell research give you hope for?”. Many of these patients and advocates are CIRM Stem Cell Champions that we’ve featured on our website, blog, and YouTube channel.

Americans for Cures is encouraging viewers to take their own stab at answering this important question by sharing a short message (on their website) or recording a video that they will share with the stem cell community. We hope that you are up for the challenge!

Mini-brains help uncover some of Zika’s secrets (Kevin McCormack).
One of the hardest things about trying to understand how a virus like Zika can damage the brain is that it’s hard to see what’s going on inside a living brain. That’s not surprising. It’s not considered polite to do an autopsy of someone’s brain while they are still using it. 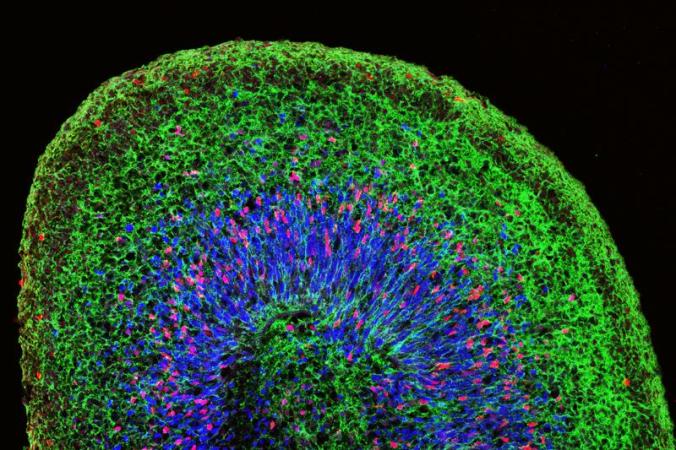 But now researchers at UCLA have come up with a way to mimic human brains, and that is enabling them to better understand how Zika inflicts damage on a developing fetus.

For years researchers have been using stem cells to help create “mini brain organoids”, essentially clusters of some of the cells found in the brain. They were helpful in studying some aspects of brain behavior but limited because they were very small and didn’t reflect the layered complexity of the brain.

In a study, published in the journal Cell Reports, UCLA researchers showed how they developed a new method of creating mini-brain organoids that better reflected a real brain. For example, the organoids had many of the cells found in the human cortex, the part of the brain that controls thought, speech and decision making. They also found that the different cells could communicate with each other, the way they do in a real brain.

They used these organoids to see how the Zika virus attacks the brain, damaging cells during the earliest stages of brain development.

In a news release, Momoko Watanabe, the study’s first author, says these new organoids can open up a whole new way of looking at the brain:

“While our organoids are in no way close to being fully functional human brains, they mimic the human brain structure much more consistently than other models. Other scientists can use our methods to improve brain research because the data will be more accurate and consistent from experiment to experiment and more comparable to the real human brain.”

iPSC recipes go head-to-head: which one is best?
In the ten years since the induced pluripotent stem cell (iPSC) technique was first reported, many different protocols, or recipes, for reprogramming adult cells, like skin, into iPSCs have been developed. These variations bring up the question of which reprogramming recipe is best. This question isn’t the easiest to answer given the many variables that one needs to test. Due to the cost and complexity of the methods, comparisons of iPSCs generated in different labs are often performed. But one analysis found significant lab-to-lab variability which can really muck up the ability to make a fair comparison.

A Stanford University research team, led by Dr. Joseph Wu, sought to eliminate these confounding variables so that any differences found could be attributed specifically to the recipe. So, they tested six different reprogramming methods in the same lab, using cells from the same female donor. And in turn, these cells were compared to a female source of embryonic stem cells, the gold standard of pluripotent stem cells. They reported their findings this week in Nature Biomedical Engineering.

Previous studies had hinted that the reprogramming protocol could affect the ability to fully specialize iPSCs into a particular cell type. But based on their comparisons, the protocol chosen did not have a significant impact on how well iPSCs can be matured. Differences in gene activity are a key way that researchers do side-by-side comparisons of iPSCs and embryonic stem cells. And based on the results in this study, the reprogramming method itself can influence the differences. A gene activity comparison of all the iPSCs with the embryonic stem cells found the polycomb repressive complex – a set of genes that play an important role in embryonic development and are implicated in cancer – had the biggest difference.

In a “Behind the Paper” report to the journal, first author Jared Churko, says that based on these findings, their lab now mostly uses one reprogramming protocol – which uses the Sendai virus to deliver the reprogramming genes to the cells:

“The majority of our hiPSC lines are now generated using Sendai virus. This is due to the ease in generating hiPSCs using this method as well as the little to no chance of transgene integration [a case in which a reprogramming gene inserts into the cells’ DNA which could lead to cancerous growth].”

Still, he adds a caveat that the virus does tend to linger in the cells which suggests that:

“cell source or reprogramming method utilized, each hiPSC line still requires robust characterization prior to them being used for downstream experimentation or clinical use.”