When half works like the whole. An international team announced this week that they had developed human stem cells able to reproduce with only half the normal set of chromosomes and that the stem cells could mature into cells of all three major types of tissue in our bodies. Even though the breakthrough has no immediate therapeutic potential, its contrary to normal finding resulted in numerous news stories in publications as disparate as The Washington Post and the New York Daily News.

Even though therapeutic options for the research seem far down the road, it offers tremendous new research options today. Our normal complement of two copies of each chromosome often protects us from single mutations in one gene, but can also make it incredibly difficult for researchers to run experiments that reveal the impact of single mutations. They now have a powerful tool for doing that, which could shed valuable insight on many diseases. That, in turn could lead to new therapies.

But the work also has potential to shed light on reproductive difficulties, and for the women who provided the eggs used to make the stem cells, it could offer a source of new tissue that matches theirs genetically.

The three teams worked at the New York Stem Cell Foundation’s own institute, Columbia University down the street and the Hebrew University of Jerusalem. The latter’s press release, used for a story in BioSpace offers a bit more detail on the research. It also offers a good quote from the lead researcher at NYSCF, Dieter Egli on the power of collaboration:

“This work is an outstanding example of how collaborations between different institutions, on different continents, can solve fundamental problems in biomedicine.”

The research, published in the journal Nature also shows the power of combined funding sources with money coming from the state through the New York Stem Cell Science Program and two private foundations, NYSCF and the Azriele Foundation in Israel.

Brain virtual reality: nerves like 3D.  With a big gamer conference in town the morning papers—yes I still read print—have been replete with photos of folks wearing virtual reality goggles. So it seems appropriate that a team at Stanford and Rutgers would announce this week that when they grew nerves from stem cells in 3D structures. They got a 100-fold increase in the survival of the new nerves when transplanted in mice compared to just injecting the cells. 3D is not virtual for our brains; it is reality.

“We take a whole bunch of these islands and then we inject them into the brain of the mouse,” Rutgers researcher Pramhas Moghe said in a story at Scicasts. “These neurons that are transplanted into the brain actually survived quite miraculously well. In fact, they survived so much better than the gold standard in the field.”

The researchers suggested that their scaffolds, about the width of a human hair, could be used for therapy in conditions ranging from Parkinson’s disease to traumatic brain injury. They published their work in the journal Nature Communications.

An electronic heart patch. While many teams have succeeded in growing bits of heart muscle that could theoretically be used to patch damage caused by a heart attack, their little mouse patients have generally not done well. The patches don’t integrate well with the existing heart, don’t continue to grow and usually fail to contract at the same rhythm as the native muscle.

A team at the Tel Aviv University created a heart patch that seems to do all these things by making it bionic with electrical parts. Electroactive polymers release growth factors or small molecules that can help integrate the patch into heart and fight inflammation around the damaged area. UPI issued a story on the work published in the Journal Nature Materials. That story quoted researcher Tal Dvir from a University press release:

“It’s very science fiction, but it’s already here, and we expect it to move cardiac research forward in a big way. Until now, we could only engineer organic cardiac tissue, with mixed results. Now we have produced viable bionic tissue, which ensures that the heart tissue will function properly.”

Dvir does go on to warn readers that this technology needs much more perfecting before you could ever consider using it in people. 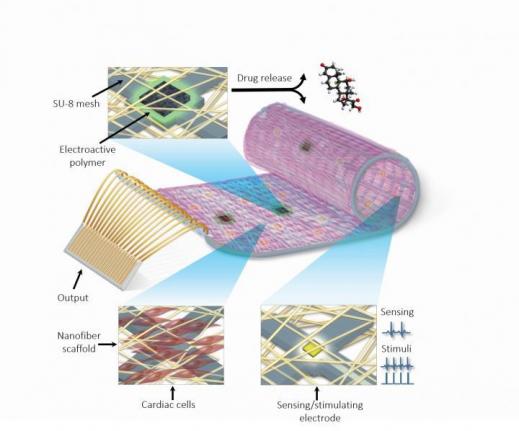 Being a savior just got easier. People with cancer who need to find a bone marrow donor for a stem cell transplant often view those donors as their saviors. The benevolence of those donors often came with a price in terms of a lengthy procedure with a bit of pain that could result in side effects from the growth factors used to boost the number of stem cells.

Traditionally, donors have had growth factors injected over the course of several days before the harvest. But an Australian team has found a new combination of drugs that can reduce the time to just one hour and a single injection. They used a new drug called BOP and an existing drug, AMD3100. The two small molecule drugs eliminate the need for using growth factors which can cause bone pain and enlargement of the spleen.

The new procedure would also benefit patients who have their own stem cells harvested prior to chemotherapy. The scientists from the company CSIRO and the Australian Regenerative Medicine Institute at Monash University published their work in Nature Communications and Medical News Today wrote the story.