It’s common knowledge that your liver is a champion when it comes to regeneration. It’s actually one of the few internal organs in the human body that can robustly regenerate itself after injury. Other organs such as the heart and lungs do not have the same regenerative response and instead generate scar tissue to protect the injured area. Liver regeneration is very important to human health as the liver conducts many fundamental processes such as making proteins, breaking down toxic substances, and making new chemicals required to digest your food.

Over the years, scientists have suggested multiple theories for why the liver has this amazing regenerative capacity. What’s known for sure is that mature hepatocytes (the main cell type in the liver) will respond to injury by dividing and proliferating to make more hepatocytes. In this way, the liver can regrow up to 70% of itself within a matter of a few weeks. Pretty amazing right?

So what is the source of these regenerative hepatocytes? It was originally thought that adult liver stem cells (called oval cells) were the source, but this theory has been disproved in the past few years. The answer to this million-dollar question, however, likely comes from a study published last week in the journal Cell. 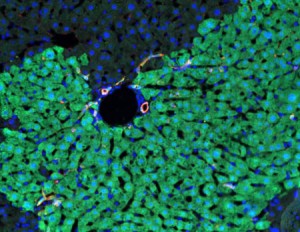 A common concern associated with regenerative tissue and cells is the development of cancer. Actively dividing cells in the liver can acquire genetic mutations that can cause hepatocellular carcinoma, a common form of liver cancer.

Currently, liver transplantation is the only therapy for end-stage liver diseases (often caused by cirrhosis or hepatitis) and aggressive forms of liver cancer. Patients receiving liver transplants from donors have a good chance of survival, however donated livers are in short supply, and patients who actually get liver transplants have to take immunosuppressant drugs for the rest of their lives. Stem cell-derived liver tissue, either from embryonic or induced pluripotent stem cells (iPSC), has been proposed as an alternative source of transplantable liver tissue. However, safety of iPSC-derived tissue for clinical applications is still being addressed due to the potential risk of tumor formation caused by iPSCs that haven’t fully matured.

This study gives hope to the future of cell-based therapies for liver disease and avoids the current hurdles associated with iPSC-based therapy. In a press release from UCSD, Dr. Karin succinctly summarized the implications of their findings.

“Hybrid hepatocytes represent not only the most effective way to repair a diseased liver, but also the safest way to prevent fatal liver failure by cell transplantation.”

This exciting and potentially game-changing research was supported by CIRM funding. The first author, Dr. Joan Font-Burgada, was a CIRM postdoctoral scholar from 2012-2014. He reached out to CIRM regarding his publication and provided the following feedback: 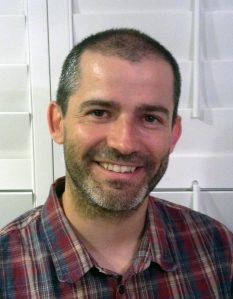 “I’m excited to let you know that work CIRM funded through the training program will be published in Cell. I would like to express my most sincere gratitude for the opportunity I was given. I am convinced that without CIRM support, I could not have finished my project. Not only the training was excellent but the resources I was offered allowed me to work with enough independence to explore new avenues in my project that finally ended up in this publication.”

We at CIRM are always thrilled and proud to hear about these success stories. More importantly, we value feedback from our grantees on how our funding and training has supported their science and helped them achieve their goals. Our mission is to develop stem cell therapies for patients with unmet medical needs, and studies such as this one are an encouraging sign that we are making progress towards to achieving this goal.