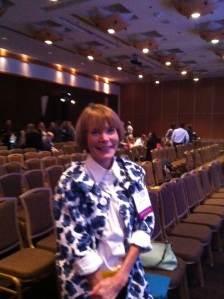 It’s never easy launching a career, regardless of your chosen profession, so when you get a high school report card that basically says you are rubbish at science you could be forgiven for thinking you should try another line of work.

But Dr. Jill Helms, a professor in the Department of Surgery at Stanford University, told young scientists not to let that kind of report set you back, because in 1949 one young student at a school in England had a report that read:

“It has been a disastrous half. His work has been far from satisfactory….he will not listen but will insist on doing his work in his own way. I believe he has ideas about becoming a Scientist; on his present showing this is quite ridiculous.”

The student was John Gurdon. In 2012 he won the Nobel Prize for Physiology or Medicine for his pioneering work in stem cell research.

Dr. Helms was talking to the students on the first day of the stem cell agency’s annual Bridges Trainee Meeting. The Bridges program funds courses and internships for undergraduate and masters-level students. The goal is to help train the next generation of stem cell scientists. The meeting is one of the highlights of the year for many of the science staff at the agency because they get to hang out with so many students who can’t help but inspire you with their enthusiasm and sheer excitement at being involved in research.

But this day, it was Dr. Helms who was doing the inspiring. She says over the years she has learned a lot of valuable lessons, many of them because of her work with Bridges students. Lessons such as:
• Dream big
• Take full advantage of all the opportunities that life offers you
• Don’t let setbacks set you back
• Don’t worry too much about the disasters
• Don’t wait for anyone to decide your fate for you. Your fate is in your own hands

To make her point Dr. Helms told how she was an Associate Professor at UCSF when she was offered a position at Stanford. She was excited at the opportunity but became a little less excited when she was told that her work of the last 8 years in skeletal development had to stay at UCSF. That meant she would have, in essence, to start her career all over again and she had no idea what she was going to do. Then she decided if she couldn’t work in skeletal development then she would study skeletal repair. From that work she learned a lot about how bones heal, that helped her learn a lot about how bones regenerate and that ultimately led to the CIRM-funded work she is doing today.

She says switching directions was one of the best things she ever did, and it happened not because she wanted to change directions but because she had to, and it opened up a whole new way of working and thinking.

“Over the course of my scientific career over three quarters of the things I have tried, either failed or morphed into something else, often times better. “

If you are in need of a little inspiration Dr. Helms is talking at the San Jose Tech Museum – alongside CIRM Science Officer Dr. Uta Grieshammer – on the promise and power of stem cells this Sunday at 2pm. You can find all the details here.

And if you would like to hear how good a speaker she is, here is Dr. Helms delivering her Elevator Pitch Kevin McCormack