Every year, the second Wednesday in October is set aside as Stem Cell Awareness Day, a time to celebrate the progress being made in the field and to remind us of the challenges that lie ahead.

While the event began here in California in 2008, with then-Governor Arnold Schwarzenegger highlighting the work of CIRM, saying: ”The discoveries being made today in our Golden State will have a great impact on many around the world for generations to come.” It has since grown to become a global event.

Here in California, for example, UC Davis and the University of Southern California (USC) both held events to mark the day.

At UC Davis Jan Nolta, PhD., the Director of the Stem Cell Program, introduced a series of speakers who highlighted the terrific work being done at the university. Peter Belafsky talked about using stem cells to repair damaged trachea and to help people who are experiencing voice or swallowing disorders. Mark Lee highlighted the progress being made in using stem cells to repair hard-to-heal broken bones. Aijun Wang focused on some really exciting work that could one day lead to a therapy for spina bifida (including some ridiculously cute video of English bulldogs who are able to walk again because of this therapy.)

USC hosted 100 local high school students for a panel presentation and discussion about careers in stem cell research. The panel featured four scientists talking about their experience, why the students should think about a career in science and how to go about planning one. USC put together a terrific video of the researchers talking about their experiences, something that can help any student around the US consider becoming part of the future of stem cell research.

Similar events were held in other institutions around California. But the celebration wasn’t limited to the Golden State. At the Texas Heart Institute in Houston, Texas, they held an event to talk to the public about the clinical trials they are supporting using stem cells to help people suffering from heart failure or other heart-related issues.

Finally, the UK-based RegMedNet, a community site that unites the diverse regenerative medicine community, marked the day by exploring some of the myths and misconceptions still surrounding stem cells and stem cell research.

You can read those here.

Every group takes a different approach to celebrating Stem Cell Awareness Day, but each is united by a common desire, to help people understand the progress being made in finding new treatments and even cures for people with unmet medical needs.

Just when you thought puppies couldn’t get any cuter, this video appears in your twitter feed.

These adorable English bulldog puppies are named Darla and Spanky, and they were born with a birth defect called spina bifida where the bones and tissue surrounding the spinal cord fail to fuse completely. Spina bifida occurs in 1500-2000 children in the US each year and can cause serious problems such as paralysis and issues with walking, cognition, and bladder or bowel control. Dogs born with this condition usually cannot use their hind legs, and as a sad consequence, are typically put down at a young age.

Cutting edge research from UC Davis is now giving these unfortunate puppies hope. Diana Farmer, a fetal surgeon at UC Davis Health, and scientists from the university’s Veterinary Institute for Regenerative Cures have developed a combination surgery and stem cell transplant, using placenta-derived mesenchymal stromal cells (PMSCs), to treat puppies with spina bifida. Because prenatal screening for spina bifida is not done in dogs, Darla and Spanky received the treatment when they were ten weeks old.

With funding from a CIRM preclinical development award, Farmer has done similar surgeries in lambs that are still in the womb. A UC Davis news release provided historical background on Farmer’s work on spina bifida,

“Farmer pioneered the use of surgery prior to birth to improve brain development in children with spina bifida. She later showed that prenatal surgery combined with human placenta-derived mesenchymal stromal cells (PMSCs), held in place with a cellular scaffold, helped research lambs born with the disorder walk without noticeable disability.”

As you can see from the video, the surgeries were a success. Darla and Spanky are now able to live up to their full puppy potential and will live happily ever after with their adoptive family in New Mexico.

Looking forward, Farmer and her team would like to treat more dogs with spina bifida so they can improve another negative consequence of spina bifida called incontinence, or an uncontrollable bladder. The UC Davis release explained that, “while Darla and Spanky are very mobile and doing well on their feet, they still require diapers.” (Side note: this video proves that puppies can make anything look cute, even dirty diapers.)

Additionally, the team is hoping to receive regulatory approval from the US Food and Drug Administration to launch a clinical trial testing this therapy in humans. If this stem cell treatment proves to be both safe and effective in clinical trials, it could potentially prevent spina bifida from ever happening in animals and in humans. 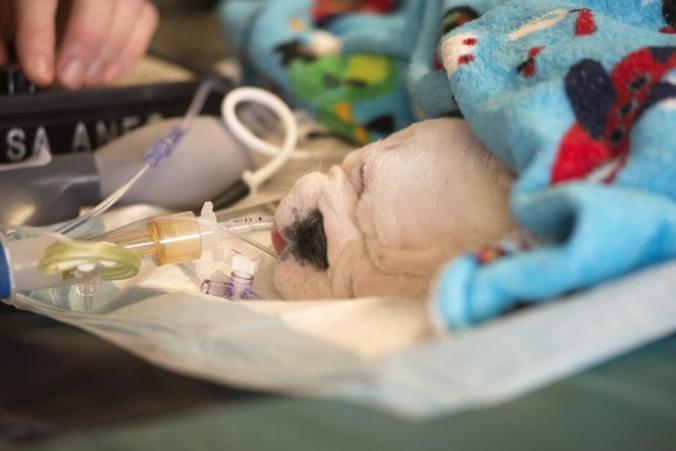 As far-fetched as it may sound, performing prenatal surgery on a fetus still growing inside its mother’s womb is actually possible. This specialized procedure is done to repair birth defects like spina bifida, in which a baby’s back bones don’t form properly around the spinal cord. This opening in the spine that leads to excess spinal fluid and leaves spinal cord nerve cells unprotected from the surrounding tissue.  These abnormalities can lead to brain damage, paralysis and loss of bladder control.

Although prenatal surgery to close up the defect can reduce future neurological problems in the child’s life, there is an increased danger of significant complications including preterm birth, separation of the placenta from the uterus and premature breaking on the amniotic membrane (ie breaking the mother’s water). 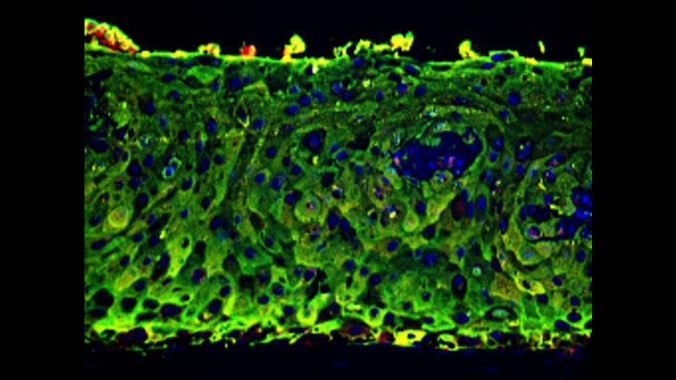 A research team at Japan’s National Research Institute for Child Health and Development is trying to overcome these problems by developing a less invasive prenatal therapy for spina bifida using stem cells. And this week, they published a Stem Cell Reports study that shows encouraging preclinical results in rodents.

The most severe and common form of spina bifida called myelomeningocele usually leads to the formation of a fluid-filled bulge protruding from a newborn’s back. The team’s therapeutic approach is to graft 3D layers of stem cell-derived skin early in the pregnancy to prevent the bulge from forming in the first place. This minimally invasive procedure would hopefully be less risky than the surgical approach.

To demonstrate a proof of concept for this approach, skin graft experiments were performed on fetal rats that had myelomeningocele-like symptoms induced by the hormone retinoic acid. Human amniotic fluid cells collected from two pregnancies with severe fetal defects were used to derived human iPSCs which were then specialized into skin cells. Over a 14-week period – a timeline short enough to allow the eventual human procedure to be performed within the 28th to 29th week of pregnancy – the cells were grown into 3D layers they call, “iSkin”.

The iSkin grafts were transplanted in 20 fetal rats through a small cut into the wall of the uterus. At birth, the myelomeningocele defect in four rats was completely covered and partially covered in another eight rats. It’s encouraging to note that no tumors formed from the skin transplants, a concern when dealing with iPSC-derived cell therapies. In press release, team lead Dr. Akihiro Umezawa spoke about the promise of this approach but also the work that still lies ahead: