There is no singular cause of Parkinson’s disease, but many—making this disease so difficult to understand and, as a result, treat. But now, researchers at the Buck Institute for Research on Aging have tracked down precisely how a genetic change, or mutation, can lead to a common form of the disease. The results, published last week in the journal Stem Cell Reports, point to new and improved strategies at tackling the underlying processes that lead to Parkinson’s. 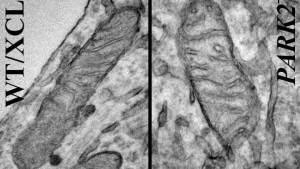 The debilitating symptoms of Parkinson’s—most notably stiffness and tremors that progress over time, making it difficult for patients to walk, write or perform other simple tasks—can in large part be linked to the death of neurons that secrete the hormone dopamine. Studies involving fruit flies in the lab had identified mitochondria, cellular ‘workhorses’ that churn out energy, as a key factor in neuronal death. But this hypothesis had not been tested using human cells.

Now, scientists at the Buck Institute have replicated the process in human cells, with the help of stem cells derived from patients suffering from Parkinson’s, a technique called induced pluripotent stem cell technology, or iPSC technology. These newly developed neurons exactly mimic the disease at the cellular level. This so-called ‘disease in a dish’ is one of the most promising applications of stem cell technology.

“If we can find existing drugs or develop new ones that prevent damage to the mitochondria we would have a potential treatment for PD,” said Dr. Xianmin Zeng, the study’s senior author, in a press release.

And by using this technology, the Buck Institute team confirmed that the same process that occurred in fruit fly cells also occurred in human cells. Specifically, the team found that a particular mutation in these cells, called Park2, altered both the structure and function of mitochondria inside each cell, setting off a chain reaction that leads to the neurons’ inability to produce dopamine and, ultimately, the death of the neuron itself.

This study, which was funded in part by a grant from CIRM, could be critical in the search for a cure for a disease that, as of yet, has none. Current treatment regimens aimed at slowing or reducing symptoms have had some success, but most begin to fail overtime—or come with significant negative side effects. The hope, says Zeng, is that iPSC technology can be the key to fast-tracking promising drugs that can actually target the disease’s underlying causes, and not just their overt symptoms. Hear more from Dr. Xianmin Zeng as she answers your questions about Parkinson’s disease and stem cell research: