THIS BLOG IS ALSO AVAILABLE AS AN AUDIOCAST ON SPOTIFY

To highlight the issues raised on World Mental Health Day we talked to one of CIRM’s newest Board member, Dr. Le Ondra Clark Harvey. She’s a psychologist and the CEO of the California Council of Community Behavioral Health Agencies (CCCBHA) a statewide advocacy organization representing mental health and substance use disorder non-profit agencies that collectively serve over 750 thousand Californians annually.

What made you want to be on the CIRM Board?

I was recommended to apply for the CIRM Board by a member of CCCBHA, the organization I am privileged to lead and serve. I saw the position as an opportunity to shed light on cognitive disorders that many do not readily think of when they think about stem cell research. The appointment also has personal meaning to me as I have a grandfather who is a cancer survivor and  who has an Alzheimer’s diagnosis.  Breast cancer has also affected women in my family, including myself, and I know that the research that CIRM funds can assist with finding a cure and providing accessible treatment options for all Californians.

A lot of people might not think that stem cells would have a role in addressing mental health issues, what role do you think they can play?

You are correct, most people do not immediately think of stem cell therapies as a remedy to brain health disorders. However, there are many cognitive disorders and symptoms that can be mitigated, and hopefully someday ameliorated, as a result of stem cell therapies. For example, autism and other developmental disabilities, dementia, Alzheimer’s, Tourette’s and tardive dyskinesia.

What are the biggest challenges we face in addressing mental health issues in this country?

Stigma remains a significant barrier that impacts the ability to provide – particularly among racially and ethnically diverse communities. In my own practice, I’ve seen how stigma can prevent individuals from entering into care even when access issues have been mitigated. Public awareness campaigns, and culturally specific advocacy efforts and practices must be integrated into treatment models in order to provide individuals with the specific care they need.

Do you think that the widespread media attention paid to Naomi Osaka and Simone Biles has helped raise awareness about mental health and perhaps also reduced some of the stigma surrounding it?

Yes, I do. Also, the pandemic has opened many individuals eyes, and engendered a sense of empathy, about the prevalence and impact that isolation and loneliness can have on a person.

For most of the 20th century, scientists thought you’re basically stuck with the brain cells you’re born with. “Everything may die, nothing may be regenerated”, is how Santiago Ramón y Cajal, the father of modern neuroscience, described nerve cells, aka neurons, in the adult brain. But, over the past few decades, it’s become clear that stem cells are present in the brain and produce new neurons over the course of our lives.

This better understanding of brain biology opened up new insights into brain function. For instance, a reduced volume of the hippocampus, an area of the brain important for learning and memory, is linked to depression and the use of anti-depressant drugs like Prozac have been shown to trigger the growth of new neurons in this part of the brain.

Now, researchers at the RIKEN institute in Japan have developed a non-invasive imaging method – so far, just in rats – to track the generation of new neurons from brain stem cells.  This study, reported in the Journal of Neuroscience, may provide new means to diagnose depression and to monitor the effectiveness of drugs in ways that aren’t currently possible. 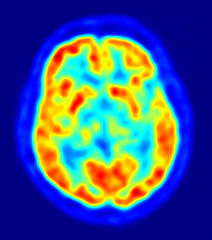 The scientists focused on the use of positron emitting tomography (PET) imaging, which involves the injecting a radioactive tracer, designed to target an organ or a specific area of an organ, into the blood. The use of this type of tracer is routine in medical imaging and the radioactivity decays so fast that it’s essentially gone within 24 hours. The radioactive signal that’s emitted out from the body is then detected with PET scanning and reveals the precise location of the tracer within the body or organ. But PET scanning of neurogenesis in the brain had proved to be difficult – no definitive signals were observed. Magnetic resonance imaging (MRI) is also a no-go because it requires the risky injection of a tracer directly into the brain.

The RIKEN team pinpointed the stumbling block: the lack of signal was due to the presence of proteins, called drug transporters, that continually pump the radioactive tracers out of the brain and back into the blood. When they re-ran the PET scan using a clinically available drug that blocks the transporter proteins, a neurogenesis signal was picked up.

Prozac helps stimulate new brain cell growth
With this obstacle overcome, the team tested out their technique. They gave one group of rats corticosterone, a stress hormone, for a month. This hormone is known to reduce neurogenesis and create depression-like behavior in the animals. They gave a second group of rats corticosterone plus Prozac. Sure enough, the PET scan signal was able to measure a decrease in neurogenesis in the corticosterone only group but also a recovery in neurogenesis in the group that received the hormone plus Prozac. Follow up analysis of rat brain slices confirmed that compared to untreated animals, neurogenesis was reduced 45% in the corticosterone group but no reduction was observed when Prozac was also included.

In a news release picked up by Nanowerk, team lead Yosky Kataoka discussed the game-changer possibilities of their new method:

“This is a very interesting finding because it has been a long-time dream to find a noninvasive test that can give objective evidence of depression and simultaneously show whether drugs are working in a given patient. We have shown that it is possible, at least in experimental animals, to use PET to show the presence of depression and the effectiveness of drugs… Since it is known that these same brain regions are involved in depression in the human brain, we would like to try this technique in the clinic and see whether it turns out to be effective in humans as well.”