After receiving his new skin, the boy plays on the grounds of the hospital in Bochum, Germany. Credit: RUB

By any standards epidermolysis bullosa (EB) is a nasty disease. It’s a genetic condition that causes the skin to blister, break and tear off. At best, it’s painful and disfiguring. At worst, it can be fatal. Now researchers in Italy have come up with an approach that could offer hope for people battling the condition.

EB is caused by genetic mutations that leave the top layer of skin unable to anchor to inner layers. People born with EB are often called “Butterfly Children” because, as the analogy goes, their skin is as fragile as the wings of a butterfly. There are no cures and the only treatment involves constantly dressing the skin, sometimes several times a day. With each change of dressing, layers of skin can be peeled away, causing pain. 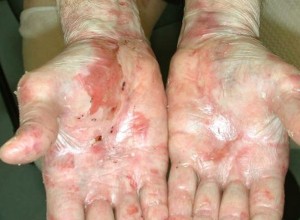 Hands of a person with EB

Life and death for one boy

For Hassan, a seven-year old boy admitted to the Burn Unit of the Children’s Hospital in Bochum, Germany, the condition was particularly severe. Since birth Hassan had repeatedly developed blisters all over his body, but several weeks before being admitted to the hospital his condition took an even more serious turn. He had lost skin on around 80 percent of his body and he was battling severe infections. His life hung in the balance.

Hassan’s form of EB was caused by a mutation in a single gene, called LAMB3. Fortunately, a team of researchers at the University of Modena and Reggio Emilia in Italy had been doing work in this area and had a potential treatment.

To repair the damage the researchers took a leaf out of the way severe burns are treated, using layers of skin to replace the damaged surface. In this case the team took a tiny piece of skin, about half an inch square, from Hassan and, in the laboratory, used a retrovirus to deliver a corrected version of the defective gene into the skin cells.

They then used the stem cells in the skin to grow sizable sheets of new skin, ranging in size from about 20 to 60 square inches, and used that to replace the damaged skin.

In the study, published in the journal Nature, the researchers say the technique worked quickly:

“Upon removal of the non-adhering gauze (ten days after grafting) epidermal engraftment was evident. One month after grafting, epidermal regeneration was stable and complete. Thus approximately 80% of the patient’s TBSA (total body surface area) was restored by the transgenic epidermis.”

The engrafted skin not only covered all the damaged areas, it also proved remarkably durable. In the two years since the surgery the skin has remained, in the words of the researchers, “stable and robust, and does not blister, itch, or require ointment or medications.”

In an interview in Science, Jakub Tolar, an expert on EB at the University of Minnesota, talked about the significance of this study:

“It is very unusual that we would see a publication with a single case study anymore, but this one is a little different. This is one of these [studies] that can determine where the future of the field is going to go.”

Because the treatment focused on one particular genetic mutation it won’t be a cure for all EB patients, but it could provide vital information to help many people with the disease. The researchers identified a particular category of cells that seemed to play a key role in helping repair the skin. These cells, called holoclones, could be an important target for future research.

The researchers also said that if a child is diagnosed with EB at birth then skin cells can be taken and turned into a ready-made supply of the sheets that can be used to treat skin lesions when they develop. This would enable doctors to treat problems before they become serious, rather than have to try and repair the damage later.

As for Hassan, he is now back in school, leading a normal life and is even able to play soccer.