There is an old Chinese proverb that states: ‘What seems like a blessing could be a curse’. In some ways that proverb could apply to stem cells. For example, pluripotent stem cells have the extraordinary ability to turn into many other kinds of cells, giving researchers a tool to repair damaged organs and tissues. But that same ability to turn into other kinds of cells means that a pluripotent stem cell could also turn into a cancerous one, endangering someone’s life.

Now researchers at the Agency for Science, Technology and Research (A*STAR) in Singapore may have found a way to stop that happening.

When you change, or differentiate, stem cells into other kinds of cells there will always be some of the original material that didn’t make the transformation. Those cells could turn into tumors called teratomas. Scientists have long sought for a way to identify pluripotent cells that haven’t differentiated, without harming the ones that have.

The team at A*STAR injected mice with embryonic stem cells to generate antibodies. They then tested the ability of the different antibodies to destroy pluripotent stem cells. They found one, they called A1, that did just that; killing pluripotent cells but leaving other cells unharmed.

Further study showed that A1 worked by attaching itself to specific molecules that are only found on the surface of pluripotent cells.

In an article on Phys.Org Andre Choo, the leader of the team, says this gives them a tool to get rid of the undifferentiated cells that could potentially cause problems:

“That was quite exciting because it now gives us a view of the mechanism that is responsible for the cell-killing effect.”

In the 1980’s and 1990’s scientists transplanted fetal tissue into the brains of people with Parkinson’s disease. They hoped the cells in the tissue would replace the dopamine-producing cells destroyed by Parkinson’s, and stop the progression of the disease.

For some patients the transplants worked well. For some they produced unwanted side effects. But for most they had little discernible effect. The disappointing results pretty much brought the field to a halt for more than a decade.

But now researchers are getting ready to try again, and a news story on NPR explained why they think things could turn out differently this time.

Viviane Tabar, a stem cell researcher at Memorial Sloan Kettering Cancer Center in New York, says in the past the transplanted tissue contained a mixture of cells:

“What you were placing in the patient was just a soup of brain. It did not have only the dopamine neurons, which exist in the tissue, but also several different types of cells.”

This time Tabar and her husband, Lorenz Studer, are using only cells that have been turned into the kind of cell destroyed by the disease. She says that will, hopefully, make all the difference:

“So you are confident that everything you are putting in the patient’s brain will consist of  the right type of cell.”

Tabar and Studer are now ready to apply to the Food and Drug Administration (FDA) for permission to try their approach out in a clinical trial. They hope that could start as early as next year. 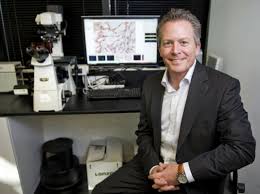 Hans Keirstead is a name familiar to many in the stem cell field. Now it could become familiar to a lot of people in the political arena too, because Keirstead has announced he’s planning to run for Congress.

Keirstead is considered by some to be a pioneer in stem cell research. A CIRM grant helped him develop a treatment for spinal cord injury.  That work is now in a clinical trial being run by Asterias. We reported on encouraging results from that trial earlier this week.

Over the years the companies he has founded – focused on ovarian, skin and brain cancer – have made him millions of dollars.

Now he says it’s time to turn his sights to a different stage, Congress. Keirstead has announced he is going to challenge 18-term Orange County Republican Dana Rohrabacher.

In an article in the Los Angeles Times, Keirstead says his science and business acumen will prove important assets in his bid for the seat:

“I’ve come to realize more acutely than ever before the deficits in Congress and how my profile can actually benefit Congress. I’d like to do what I’m doing but on a larger stage — and I think Congress provides that, provides a forum for doing the greater good.”