Starting a clinical trial is like taking a step into the unknown. It’s moving a potential therapy out of the lab and testing it in people. To reach this point the researchers have done a lot of work trying to ensure the therapy is safe. But that work was done in the lab, and on mice or other animals. Now it’s time to see what happens when you try it in the real world.

It can be quite nerve wracking for everyone involved: both the researchers, because years of hard work are at stake, and the patients, because they’re getting something that has never been tested in humans before; something that could, potentially, change their lives.

Today we got some good news about one clinical trial we are funding, the Asterias Biotherapeutics spinal cord injury trial. Asterias announced that its Data Monitoring Committee (DMC) has reviewed the safety data from the first two groups of patients treated and found no problems or bad side effects.

That’s an important first step in any clinical trial because it shows that, at the very least, the therapy is not going to make the patient’s condition any worse.

The big question now, is will it make their condition better? That’s something we’ll come back to at a later date when we have a better idea how the people treated in the trial are doing. But for now let’s take a deeper dive into the safety data.

Asterias – by the numbers

This current trial is a Phase 1/2a trial. The people enrolled have all experienced injuries in the C5-C7 vertebrae – that’s high up in the neck – and have essentially lost all feeling and movement below the injury site. All are treated between two weeks and one month after the injury was sustained.

The therapy involves transplants of Asterias’ AST-OPC1 cells which were made from human embryonic stem cells. The AST-OPC1 cells have been turned into oligodendrocyte progenitors, which are capable of becoming the kind of cells which help protect nerve cells in the central nervous system, the area damaged in spinal cord injury.

As Dr. Edward Wirth, the Chief Medical Officer at Asterias, said in a news release, this means the company can plan for its next phase:

“The positive safety data in the previous phase 1 study and in the ongoing phase 1/2a study gives us the confidence to now proceed to administration of 20 million cells, which based on our significant pre-clinical research is likely well within the dosing range where we would expect to see clinically meaningful improvement in these patients.”

Asterias is now looking to enroll 5-8 patients for this 20 million cell phase. 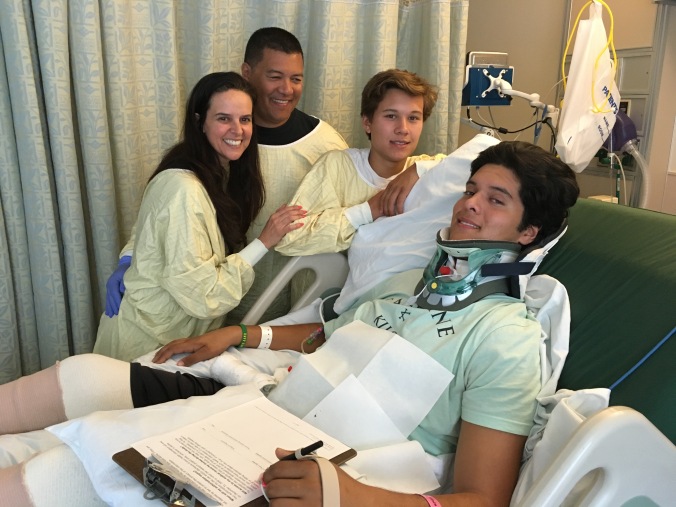 For people like Jake Javier this news is not about numbers or data, it’s personal. Earlier this summer Jake broke his neck at a pool party, celebrating graduating from high school. It left him paralyzed from the chest down with extremely limited use of his arms and hands. On July 7th Jake was enrolled in the Asterias trial, and had ten million cells transplanted into his neck.

It could be months, even as much as one year, before we know if those cells are having any beneficial effect on Jake. But at least for now we know they don’t seem to be having any negative effects.

“First do no harm” is the cardinal rule that all budding physicians are taught. This trial seems to be meeting that benchmark. Our hope now is that it will do a lot more, and truly make a difference in the lives of people like Jake.

As Randy Mills, CIRM’s President and CEO, said in a news release:

“I recently met with Jake and heard first-hand what he and his family are going through in the aftermath of his injury. But I also saw a young man with remarkable courage and determination. It is because of Jake, and the others who volunteer to take part in clinical trials, that progress is possible. They are true heroes.”

* On a side note, Roman Reed, a great champion of stem cell research and a patient advocate extraordinaire, helped make much of this story happen. He helped Jake enroll in the Asterias trial ,and the research that led to this therapy was pioneered by Dr. Hans Keirstead who was funded by the Roman Reed Spinal Cord Injury Research Act.