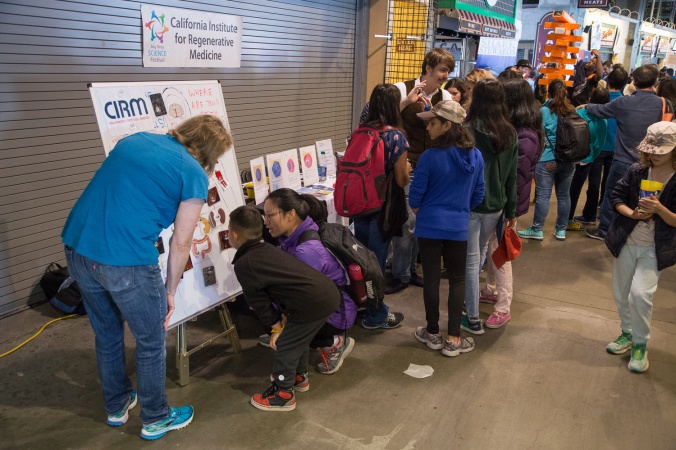 The CIRM booth at Discovery Day at AT&T Park

Someone stole my thigh bone. One minute it was there. The next, gone. I have narrowed down the list of suspects to the more than 25,000 people attending Discovery Day at San Francisco’s AT&T Park.

To be honest, the bone was just a laminated image of a bone, stuck to the image of a person drawn on a white board. We were using it, along with laminated images of a brain, liver, stomach and other organs and tissues, to show that there are many different kinds of stem cells in the body, and they all have different potential uses.

The white board and its body parts were gimmicks that we used to get kids to come up to the CIRM booth and ask what we were doing. Then, as they played with the images, and tried to guess which stem cells went where, we talked to their parents about stem cell research, and CIRM and the progress being made.

We also used Play Doh so that the kids could model cell division and specialization during embryonic development. But mostly it was so the kids could play with the Play Doh while we talked to their parents.

It is shameless I know but when you are competing against more than 130 other booths for people’s attention – and some of these booths had live snakes, virtual reality devices, or they just let kids throw and hit things – you have to be creative.

And creativity was certainly the key word, because Discovery Day – part of the annual week-long Bay Area Science Fair – was filled with booths from companies and academic institutions promoting every imaginable aspect of science.

So why were we there? Well, first, education has been an important part of CIRM’s mission ever since we were created. Second, we’re a state agency that gets public funding so we feel we owe it to the public to explain how their money is being used. And third, it’s just a lot of fun.

NASA was there, talking about exploring deep space. And there were booths focused on exploring the oceans, and saving them from pollution and over-fishing. You could learn about mathematics and engineering by building wacky-looking paper airplanes that flew long distances, or you could just sit in the cockpit of a fighter jet. 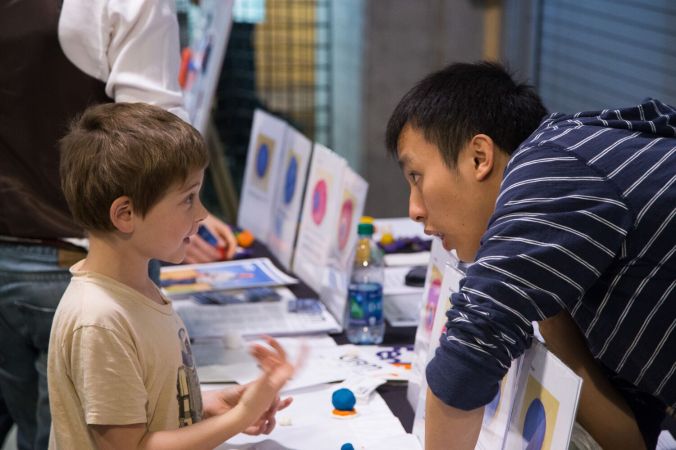 And everywhere you looked were families, with kids running up to the different booths to see what was there. All they needed was a little draw to get them to stick around for a few minutes, so you could talk to them and explain to them what stem cells are and why they are so amazing. Some of the kids were fascinated and wanted to know more: some just wanted to use the Play Doh;  at least one just wanted to eat the Play Doh, but fortunately we were able to stop that happening.

It was an amazing sight to see a baseball stadium filled with tens of thousands of people, all there to learn about science. At a time when we are told that kids don’t care about science, that they don’t like math, this was the perfect response. All you had to do was look around and see that kids were fascinated by science. They were hungry to learn how pouring carbon dioxide on a candle puts out the flame. They delighted in touching an otter pelt and feeling how silky smooth it is, and then looking at the pelt under a microscope to see just how extraordinarily dense the hairs are and how that helps waterproof the otter.

And so yes, we used Play Doh and a white board person to lure the kids to us. But it worked.

There was another booth where they had a couple of the San Francisco 49er’s cheerleaders in full uniform. I don’t actually know what that had to do with teaching science but it was very popular with some of the men. Maybe next year I could try dressing up like that. It would certainly draw a crowd.

Check us out on Instagram to learn more about CIRM’s educational outreach efforts.

We had a lot of fun this weekend teaching young minds about what stem cells are and where they are located in the human body at the @bayareascience #DiscoveryDay festival. We had one activity where kids learned about embryonic stem cells and development using playdoh and another white board activity about adult stem cells. Students learned that each organ has its own set of adult stem cells that can regenerate lost or damaged cells in that specific organ. It was really fun to explain to kids and their parents why stem cells and regenerative medicine research are important. • • • #BASF2016 #stemcells #stemcellresearch #stemeducation #STEM #teaching #education #research #attpark #CIRM #development #embryonicstemcells

Making science fun. That was the goal of the Discovery Days event on Saturday in San Francisco, part of the Bay Area Science Festival. If numbers alone are any measure of success they certainly met their goal. The place was packed. But it was more than just the size of the crowd that demonstrated how successful the event was; it was also the makeup and enthusiasm of those there.

Using Play-Doh to explain the wonders of stem cells

For five hours on a beautiful, sunny Saturday – when they could have gone anywhere and done anything – tens of thousands of people, parents and children, chose to come to Discovery Days and immerse themselves in science. And they clearly loved it.

There were more than 150 exhibits to choose from with a wide variety of topics to learn about – everything from climate change and exploring outer space to life in the ocean and everything in between.

In just the small section where the stem cell agency had its booth there were exhibits on DNA and genetics, the power of imagination, and a program designed to encourage more young women to pursue careers in engineering and orthopedics.

Each one chose a different way to engage the crowd, some used fancy high tech tools, others chose more basic approaches. At our booth we used Play-Doh to draw children to us where they could learn about cellular development. It’s always fun to see their eyes widen in amazement when you show them how we all began: as a single, solitary cell. And how that single cell quickly divides into many, eventually making up all the different types of cells that make us human. 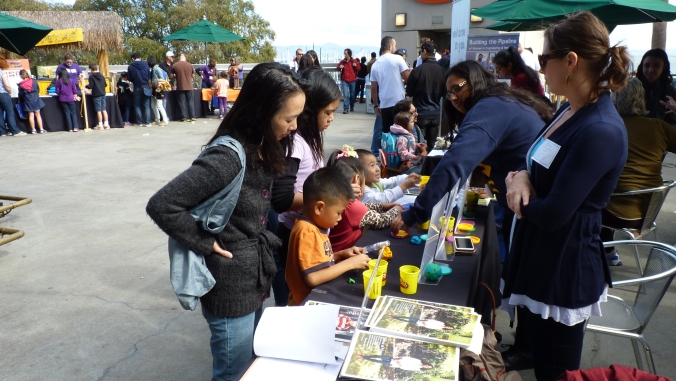 The enthusiasm by kids and parents alike was infectious—children racing from one booth to the next, eager to see what each one had in store. Of course the fact that some booths wowed the parents as well as the kids didn’t hurt—but the bottom line was the science and the scientists, showing that it could be fun and fascinating and engaging. While not many parents got into the Play-Doh themselves, they spent considerable time talking with us about the progress in stem cell science.

When you look around and see so many children wearing big goggles, pretending to be scientists, it’s not hard to think of them years later, wearing those same goggles and no longer pretending but actually working as researchers—truly making the world a better place.

And ultimately that was the goal of the event, helping the kids find “something that will unleash their inner scientist.”