Our stem cell photo of the week is a screenshot from yesterday’s Facebook Live event: “Ask the Expert: Stem Cells and Stroke”. It was our first foray into Facebook Live and, dare I say, it was a success with over 150 comments and 4,500 views during the live broadcast. Our panel included Dr. Gary Steinberg, MD, PhD, the Chair of Neurosurgery at Stanford University, who talked about promising clinical trial results testing a stem cell-based treatment for stroke. Lila Collins, PhD, a Senior Science Officer here at CIRM, provided a big picture overview of the latest progress in stem cell therapies for stroke. Sonia Coontz, a patient of Dr. Steinberg’s, also joined the live broadcast. She suffered a devastating stroke several years ago and made a remarkable recovery after getting a stem cell therapy. She had an amazing story to tell. And Kevin McCormack, CIRM’s Senior Director of Public Communications, moderated the discussion.

Did you miss the Facebook Live event? Not to worry. You can watch it on-demand on our Facebook Page.

What other disease areas would you like us to discuss? We plan to have these Ask the Expert shows on a regular basis so let us know by commenting here or emailing us at info@cirm.ca.gov!

Salk Institute researchers published results this week that shed new light on why the brains of older individuals may be more prone to neurodegenerative diseases like Parkinson’s and Alzheimer’s. To make this discovery, the team applied a technique they devised back in 2015 which directly converts skin cells into brain cells, aka neurons. The method skips the typical intermediate step of reprogramming the skin cells into induced pluripotent stem cells (iPSCs).

They collected skin samples from people ranging in age from 0 to 89 and generated neurons from each. With these cells in hand, the researchers then examined how increased age affects the neurons’ mitochondria, the structures responsible for producing a cell’s energy needs. Previous studies have shown a connection between faulty mitochondria and age-related disease.

While the age of the skin cells had no bearing on the health of the mitochondria, it was a different story once they were converted into neurons. The mitochondria in neurons derived from older individuals clearly showed signs of deterioration and produced less energy. 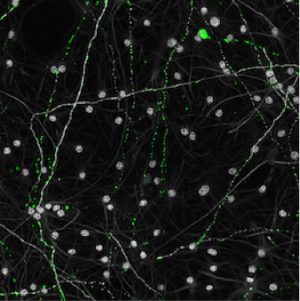 The researchers think this stark difference in the impact of age on skin cells vs. neurons may occur because neurons have higher energy needs. So, the effects of old age on mitochondria only become apparent in the neurons. In a press release, Salk scientist Jerome Mertens explained the result using a great analogy:

“If you have an old car with a bad engine that sits in your garage every day, it doesn’t matter. But if you’re commuting with that car, the engine becomes a big problem.”

The team is now eager to use this method to examine mitochondrial function in neurons derived from Alzheimer’s and Parkinson’s patient skin samples and compared them with skin-derived neurons from similarly-aged, healthy individuals.

The study, funded in part by CIRM, was published in Cell Reports.

One of the most intriguing, most fundamental questions in biology is how an embryo, basically a non-descript ball of cells, turns into a complex animal with eyes, a brain, a heart, etc. A deep understanding of this process will help researchers who aim to rebuild damaged or diseased organs for patients in need. 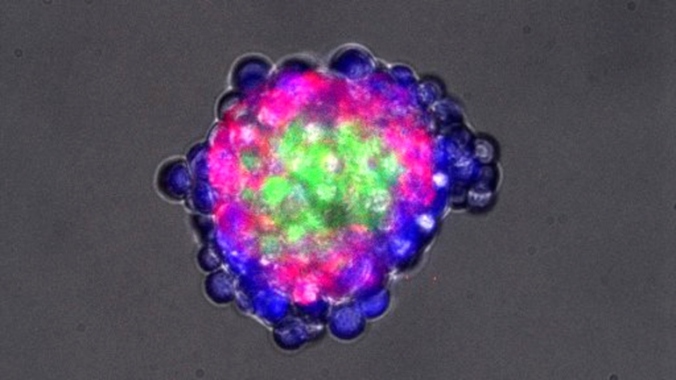 Researchers programmed cells to self-assemble into complex structures such as this one with three differently colored layers. Credit: Wendell Lim/UCSF

A fascinating report published this week describes a system that allows researchers to program cells to self-organize into three-dimensional structures that mimic those seen during early development. The study applied a customizable, synthetic signaling molecule called synNotch developed in the Wendell Lim’s UCSF lab by co-author Kole Roybal, PhD, now an assistant professor of microbiology and immunology at UCSF, and Leonardo Morsut, PhD, now an assistant professor of stem cell biology and regenerative medicine at the University of Southern California.

A UCSF press release by Nick Weiler describes how synNotch was used:

“The researchers engineered cells to respond to specific signals from neighboring cells by producing Velcro-like adhesion molecules called cadherins as well as fluorescent marker proteins. Remarkably, just a few simple forms of collective cell communication were sufficient to cause ensembles of cells to change color and self-organize into multi-layered structures akin to simple organisms or developing tissues.”

Senior author Wendell Lim also explained how this system could overcome the challenges facing those aiming to build organs via 3D bioprinting technologies:

“People talk about 3D-printing organs, but that is really quite different from how biology builds tissues. Imagine if you had to build a human by meticulously placing every cell just where it needs to be and gluing it in place. It’s equally hard to imagine how you would print a complete organ, then make sure it was hooked up properly to the bloodstream and the rest of the body. The beauty of self-organizing systems is that they are autonomous and compactly encoded. You put in one or a few cells, and they grow and organize, taking care of the microscopic details themselves.”

Study was published in Science.