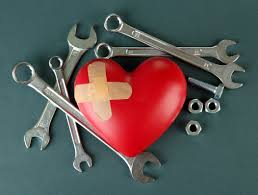 Repairing, even reversing, the damage caused by a heart attack is the Holy Grail of stem cell researchers. For years the Grail seemed out of reach because the cells that researchers transplanted into heart attack patients didn’t stick around long enough to do much good. Now researchers at Stanford may have found a way around that problem.

In a heart attack, a blockage cuts off the oxygen supply to muscle cells. Like any part of our body starved off oxygen the muscle cells start to die, and as they do the body responds by creating a layer of scars, effectively walling off the dead tissue from the surviving healthy tissue.  But that scar tissue makes it harder for the heart to effectively and efficiently pump blood around the body. That reduced blood flow has a big impact on a person’s ability to return to a normal life.

In the past, efforts to transplant stem cells into the heart had limited success. Researchers tried pairing the cells with factors called peptides to help boost their odds of surviving. That worked a little better but most of the peptides were also short-lived and weren’t able to make a big difference in the ability of transplanted cells to stick around long enough to help the heart heal.

Now, in a CIRM-funded study published in the journal Nature Biomedical Engineering, a team at Stanford – led by Dr. Joseph Wu – believe they have managed to create a new way of delivering these cells, one that combines them with a slow-release delivery mechanism to increase their chances of success.

The team began by working with a subset of bone marrow cells that had been shown in previous studies to have what are called “pro-survival factors.” Then, working in mice, they identified three peptides that lived longer than other peptides. That was step one.

Step two involved creating a matrix, a kind of supporting scaffold, that would enable the researchers to link the three peptides and combine them with a delivery system they hoped would produce a slow release of pro-survival factors.

Step three was seeing if it worked. Using fluorescent markers, they were able to show, in laboratory tests, that unlinked peptides were rapidly released over two or three days. However, the linked peptides had a much slower release, lasting more than 15 days.

Out of the lab and into animals

While these petri dish experiments looked promising the big question was could this approach work in an animal model and, ultimately, in people. So, the team focused on cardiac progenitor cells (CPCs) which have shown potential to help repair damaged hearts, but which also have a low survival rate when transplanted into hearts that have experienced a heart attack.

The team delivered CPCs to the hearts of mice and found the cells without the pro-survival matrix didn’t last long – 80 percent of the cells were gone four days after they were injected, 90 percent were gone by day ten. In contrast the cells on the peptide-infused matrix were found in large numbers up to eight weeks after injection. And the cells didn’t just survive, they also engrafted and activated the heart’s own survival pathways.

The team then tested to see if the treatment was helping improve heart function. They did echocardiograms and magnetic resonance imaging up to 8 weeks after the transplant surgery and found that the mice treated with the matrix combination had a statistically improved left ventricular function compared to the other mice.

Jayakumar Rajadas, one of the authors on the paper told CIRM that, because the matrix was partly made out of collagen, a substance the FDA has already approved for use in people, this could help in applying for approval to test it in people in the future:

“This paper is the first comprehensive report to demonstrate an FDA-compliant biomaterial to improve stem cell engraftment in the ischemic heart. Importantly, the biomaterial is collagen-based and can be readily tested in humans once regulatory approval is obtained.”