A stem cell’s capacity to lay quiet and, when needed, to self-renew plays a key role in restoring and maintaining the health of our organs. Unfortunately, cancer stem cells possess that same property allowing them to evade radiation and chemotherapy treatments which leads to tumor regrowth. And a CIRM-funded study published today in Cell shows the deviousness of these cancer cells goes even further. The Stanford research team behind the study found evidence that brain stem cells, which normally guide brain development and maintenance, unintentionally communicate with brain cancer cells in deadly tumors, called gliomas, providing them a means to invade other parts of the brain. But the silver lining to this scary insight is that it may lead to new treatment options for patients.

High grade gliomas do not end well
The most aggressive forms of glioma are called high grade gliomas and they carry devastating prognoses. For instance, the most common form of these tumors in children has a median survival of just 9 months with a 5-year survival of less than 1%. Surgery or anti-cancer therapies may help for a while but the tumor inevitably grows back. 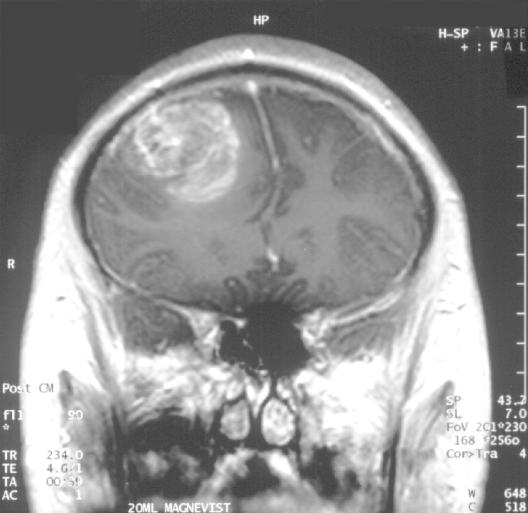 Researchers have observed that gliomas typically originate in the brain stem and very often invade a brain stem cell-rich area, called the subventrical zone (SVZ), that provides a space for the therapy-resistant cancer stem cells to hole up. This path of tumor spread is associated with a shorter time to relapse and poorer survival but the exact mechanism wasn’t known. The Stanford team hypothesized that SVZ brain stem cells release some factor that attracts the gliomas to preferentially invade that part of the brain.

To test this chemo-attraction idea, they mimicked cancer cell invasion in a specialized, dual compartment petri dish called a Boyden chamber. In the bottom compartment, they placed the liquid food, or media, that SVZ brain stem cells had been grown in. On the upper compartment, they placed the cancerous glioma cells. A porous, gelatin membrane between the two compartments acts as a barrier but allows the cells to receive signals from the lower compartment and migrate down into the media if a chemoattractant is present. And that’s what they saw: a significant glioma cell migration through the gelatin toward the brain stem cell media.

Pleiotrophin: an unintentional communicator with brain cancer cells
Something or somethings in the SVZ brain stem cell media had to be attracting the glioma cells. So, the Stanford team analyzed the composition of the media and identified four proteins that, when physically complexed together, had the same chemo-attraction ability as the media. They were pleased to find that one of the four proteins is pleiotrophin which is known to not only play a role in normal brain development and regeneration but also to increase glioma cell migration. And in this study, they showed that higher levels of pleiotrophin are present in the SVZ brain stem cell area compared to other regions of the brain. They went on to show that blocking the production of pleiotrophin in mice reduced the invasion of glioma cells into the SVZ region. This result suggests that blocking the release of pleiotrophin by brain stem cells in the SVZ could help prevent or slow down the spread of glioma in patients’ brains without the need of irradiating this important part of the brain.

To further explore this potential therapeutic approach, the team examined hsp90, one of the other three proteins complexed with pleiotrophin. Though it doesn’t have chemoattractant properties, it still is a necessary component and may act to stabilize pleiotrophin. It also turns out that inhibitors for hsp90 have already been developed in the clinic for treating various cancers. When the researchers in this study blocked hsp90 production in the SVZ region of mice, they observed a reduced invasion of glioma cells. Though clinical grade hsp90 inhibitors exist, team lead  Michelle Monje, MD, PhD – assistant professor of neurology, Stanford University – tells me that some tweaking of these drugs will be necessary to reach gliomas:

“Our challenge is to find an hsp90 inhibitor that penetrates the brain at effective concentrations.”

Once they find that inhibitor, it could provide new options, and hope, for people diagnosed with this dreadful cancer.