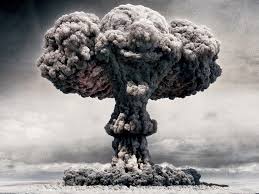 Stem cells key to reducing radiation damage. With the anniversary of Hiroshima and President Obama’s historic visit to the site all over the news this week, it was nice to read about research that could result in many more people surviving a major radiation event—either from a power plant accident or the unthinkable repeat of history.

Much of the life-threatening damage that occurs early after radiation exposure happens in the gut, so a way to reduce that damage could buy time for other medical care. A team at the University of Texas Medical Branch at Galveston has discovered a drug that activates stem cells in the gut, which help maintain a healthy population of crypt cells that can repair gut damage.

A single injection of the small protein drug in mice significantly increased their survival, even if it was given 24 hours after exposure to radiation. The researchers published their work in the journal Laboratory Investigation and in a story written for MedicalNewsToday the lead author, Carla Kantara suggested the role the drug might have:

“The current results suggest that the peptide may be an effective emergency nuclear countermeasure that could be delivered within 24 hours after exposure to increase survival and delay mortality, giving victims time to reach facilities for advanced medical treatment.”

Making good cartilage for your knees. Rarely a week goes by that I don’t tell a desperate osteoarthritis patient with painful knees that I am treating my own rotten knees with physical therapy until we learn how to use stem cells to make the right kind of cartilage needed for lasting knee repair. So, I was thrilled to read this week that the National Institutes of Health awarded Case Western Reserve University in Cleveland $6.7 million to develop a center to create standardized systems for monitoring stem cells as they convert into cartilage and for evaluating the resulting cartilage. 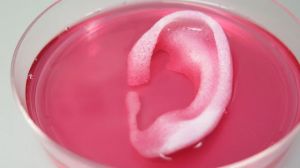 There are a couple problems with existing attempts to use stem cells for knee and other cartilage repair. First not all cartilage is equal and too often stem cells form the soft kind like in your earlobe, not the hard kind needed to protect knees. Also, it has been hard to generate enough cells to replace the entire area that tends to be eroded away in osteoarthritis, one of the leading causes of disability.

The new center, which will be available to researchers anywhere in the world, will develop tools for them to measure four things:

Damaged muscle grabs stem cells.  All our tissues have varying skills in self repair. Muscles generally get pretty high marks in that department, but we don’t really know how they do it. A team at Australia’s Monash University used the transparent Zebra fish and fancy microscopes to actually watch the process.

When they injured mature muscle cells they saw those cells send out projections that actually grabbed nearby muscle stem cells, which regenerated the damaged muscle. They published their findings in Science, the university issued a press release and a news site for Western Australia, WAtoday wrote a story quoting the lead researcher Peter Currie:

“A significant finding is that the wound site itself plays a pivotal role in coordinating the repair of damaged tissue. If that response could be sped up, we are going to get better, or more timely, regeneration and healing.”

The online publication posted four beautiful florescent images of the cells in action. 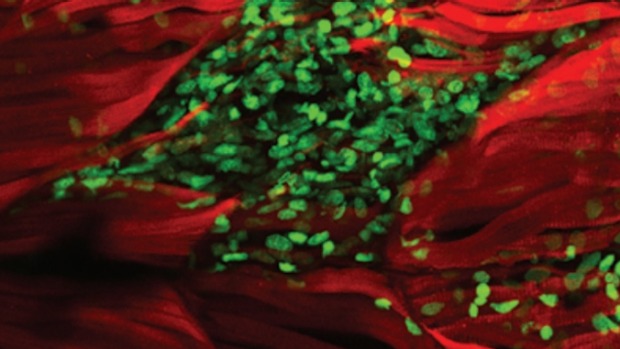 “Bar coding” cells points to better transplants.  A team at the University of Southern California, partially funded by CIRM, developed a way genetically “bar code” stem cells so they can be tracked after transplant. In this case they watched the behavior of blood-forming stem cells and found the dose of cells transplanted had a significant impact on what the cells became as they matured.

The general dogma has blood stem cells producing all the various types of cells in our blood system including all the immune cells needed by cancer patients after certain therapies. But the USC tracking showed that only 20 to 30 percent of the stem cells displayed this do-it-all behavior. The type of immune cells created by the remaining 70 to 80 percent varied depending on whether there was a low dose of cells or a high dose, which can be critical to the effectiveness of the transplant.

“The dose of transplanted bone marrow has strong and lasting effects on how HSCs specialize and coordinate their behavior,” said Rong Lu, senior author, in a USC press release posted by ScienceDaily. “This suggests that altering transplantation dose could be a tool for improving outcomes for patients — promoting bone marrow engraftment, reducing the risk of infection and ultimately saving lives.”