In April of this year, the Centers for Disease Control and Prevention (CDC) announced their conclusion that Zika virus causes microcephaly, a birth defect that results in abnormal brain development and a smaller sized head in infants. Rather than a single study being responsible for their conclusion, the CDC argued that “mounting evidence” from multiple recent reports has made the link between Zika infection in pregnant women and microcephaly undeniable.

Now that the general consensus is that Zika virus impairs brain development, scientists are making fast progress to develop appropriate models of brain development to understand exactly how the virus causes microcephaly. We recently blogged about one study from UC San Francisco, which found a molecular link between Zika infection and the function of brain stem cells. They used a brain organoid model, derived from human stem cells, to identify a protein receptor called AXL that is expressed on the surface of brain stem cells and is a major entry point for Zika virus infection.

The power of mini-brains

So called “mini-brains”, or 3D brain organoids, have proven to be a very useful model for brain development and Zika virus infection. With rapid advances in stem cell technologies, mini-brains now develop the appropriate cell types and brain structures representative of the first trimester of fetal brain development. They also can be derived from both embryonic stem cells and induced pluripotent stem cells, making them a versatile technology that can model patient specific diseases.

Speaking of mini-brains, a study was published just last week in the journal Cell Stem Cell from UC San Diego that used mini-brains to identify an immune system molecule that gets hijacked by the Zika virus. They found that Toll-like-Receptor 3 (TLR3) negatively impacts the ability of brain stem cells to differentiate or specialize into the mature cells of the brain.

When the organoids were exposed to a strain of the Zika virus, MR766, their size five days later was smaller than organoids that weren’t exposed to the virus. The growth rate for normal organoids in the time period was 22.6% while the rate for Zika-treated organoids was only 16%. Dissection of the Zika-treated organoids revealed that the virus was successful in infecting brain stem cells specifically and somehow impaired their ability to differentiate. They also noticed that a specific immune molecule called TLR3 was abnormally activated in the organoids after Zika infection.

TLR3: too much of a good thing

In an attempt to put the puzzle pieces together, the authors focused on TLR3 and its potential role in causing brain development defects caused by Zika virus. TLR3 is a sentinel of the innate immune system, the body’s first line defense against infection. It’s a receptor on the surface of cells that can recognize foreign viruses and mount an immune response by activating infection fighting genes. 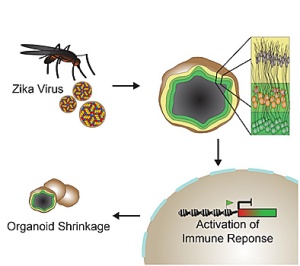 TLR3 sounds like a good guy when it comes to defending the immune system, but there are cases where too much TLR3 is not a good thing. Activation of TLR3 in Zika-infected brain organoids turned on a group of 41 genes that blocked the differentiation of brain stem cells, causing brain organoid shrinkage, and also caused the stem cells to commit apoptosis, a cellular form of programmed suicide.

“We all have an innate immune system that evolved specifically to fight off viruses, but here the virus turns that very same defense mechanism against us. By activating TLR3, the Zika virus blocks genes that tell stem cells to develop into the various parts of the brain. The good news is that we have TLR3 inhibitors that can stop this from happening.”

In a UCSD press release, the authors admit that this work is still in its early stages. The experiments they conducted used both mouse and human cells and further work is needed to determine whether TLR3 is an appropriate target for blocking Zika infection in humans.

They also note that this study tests only one strain of the Zika virus, one that originated in Uganda, and that other strains prevalent in countries like Latin America and Asia should be tested as well. Other strains could have different mechanisms of infection and different effects on the function of brain stem cells.

Rana acknowledged this and commented:

“We used this 3D model of early human brain development to help find one mechanism by which Zika virus causes microcephaly in developing fetuses, but we anticipate that other researchers will now also use this same scalable, reproducible system to study other aspects of the infection and test potential therapeutics.”