Did you know that when you’re born, your brain contains around 100 billion nerve cells? This is impressive considering that these nerve cells, also called neurons, are already connected to each other through an intricate, complex neural network that is essential for brain function.

Here’s how the brain does it. During development, neural stem cells produce neurons that navigate their way through the brain. Once at their destination, neurons set up shop and send out long extensions called axons and branched extensions called dendrites that allow them to form what are called synaptic connections through which they can communicate through electrical and chemical signals.

Studies of early brain development revealed that neurons in the developing brain go on overdrive and make more synaptic connections than they need. Between birth and early adulthood, the brain carefully prunes away weak or unnecessary connections, and by your mid-twenties, your brain has eliminated almost half of the synaptic connections you started out with as a baby.

This synaptic pruning process allows the brain to fine-tune its neural network and strengthen the connections between neurons that are important for brain function. It’s similar to how a gardener prunes away excess branches on fruit trees so that the resulting branches can produce healthier and better tasting fruit.

The brain can make new neurons

It was thought that by adulthood, this process of pruning excess connections between neurons was over. However, a new study from the Salk Institute offers visual proof that synaptic pruning occurs during adulthood similarly to how it does during development. The work was published today in the journal Nature Neuroscience, and it was funded in part by CIRM. 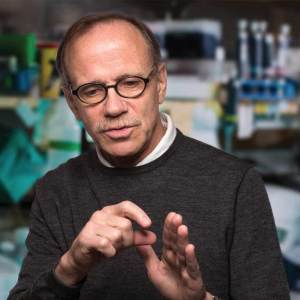 The study was led by senior author and Salk Professor Rusty Gage. Gage is well known for his earlier work on adult neurogenesis. In the late 90’s, he discovered that the adult brain can in fact make new neurons, a notion that overturned the central dogma that the brain doesn’t contain stem cells and that we’re born with all the neurons we will ever have.

There are two main areas of the adult brain that harbor neural stem cells that can generate new neurons. One area is called the dentate gyrus, which is located in the memory forming area of the brain called the hippocampus. Gage and his team were curious to know whether the new neurons generated from stem cells in the dentate gyrus also experienced the same synaptic overgrowth and pruning that the neurons in the developing brain did.

They developed a special microscope technique that allowed them to visually image the development of new neurons from stem cells in the dentate gyrus of the mouse brain. Every day, they would image the growing neurons and monitor how many dendritic branches they sent out.

After observing the neurons for a few weeks, they were amazed to discover that these new neurons behaved similarly to neurons in the developing brain. They sent out dozens of dendritic branches and formed synaptic connections with other neurons, some of which were eventually pruned away over time.

This phenomenon was observed more readily when they made the mice exercise, which stimulated the stem cells in the dentate gyrus to divide and produce more neurons. These exercise-induced neurons robustly sent out dendritic branches only to have them pruned back later.

First author on the paper, Tiago Gonçalves commented on their observations:

“What was really surprising was that the cells that initially grew faster and became bigger were pruned back so that, in the end, they resembled all the other cells.”

Rusty Gage was also surprised by their findings but explained that developing neurons, no matter if they are in the developing or adult brain, have evolved this process in order to establish the best connections.

“We were surprised by the extent of the pruning we saw. The results suggest that there is significant biological pressure to maintain or retain the dendrite tree of these neurons.”

A diagram showing how the adult brain prunes back the dendritic branches of newly developing neurons over time. (Image credit: Salk Institute).

Gonçalves also mentioned that this study raises another important question related to the regenerative medicine applications of stem cells for neurological disease.

“This also has big repercussions for regenerative medicine. Could we replace cells in this area of the brain with new stem cells and would they develop in the same way? We don’t know yet.”