Few words strike me with more dread than glioblastoma, the name for a very aggressive, incurable cancer of the brain. Although surgery and chemotherapy can help hold off or reverse a glioblastoma’s growth for a while, almost inevitably the tumor comes back along with a terrible prognosis: an average survival time of 12 to 15 months after diagnosis with a less than 5% survival rate beyond five years.

MRI scans of glioblastoma in the brain of a 15 year-old boy.
Image: Wikipedia

Brain tumor stem cells (BTSCs) are thought to be the culprits behind the cancer’s reoccurrence because of their stem cell-like ability for limitless self-renewal. So the idea is that even a tiny number of BTSCs left behind after treatment will likely to lead to a tumor regrowth and treatment relapse. If researchers can better understand what makes the BTSCs tick, they could find ways to eliminate them and cure this dreadful disease. 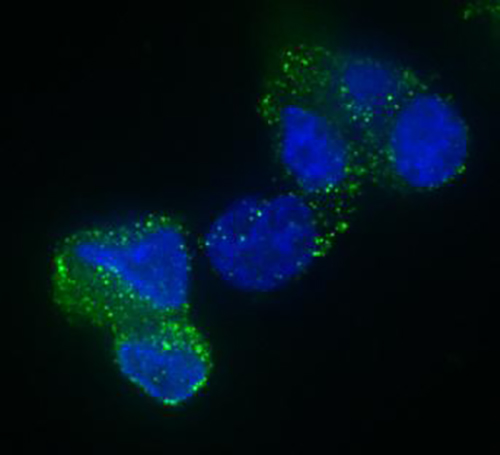 This week researchers largely from The Ottawa Hospital Research Institute report on the identification of a key piece of BTSCs’ molecular machinery that provides a promising target for novel glioblastoma treatments. The study, published in Nature Neuroscience, focuses on the epidermal growth factor (EGF) cell signaling pathway. In normal cells, the EGF protein binds to the EGF receptor (EGFR) on a cell’s surface which triggers a cascade of protein interactions inside the cell that stimulate cell growth among other things.

EGFRvIII: a cancer stem cell gas pedal stuck to the floorboard
Eventually a given EGF signaling event subsides. But many BTSCs found in glioblastoma tissue samples have a mutant form of EGFR, called EGFRvIII, that permanently switches this signaling pathway into the “on position” even in the absence of EGF. It’s like the gas pedal of a car that gets stuck to the floorboard, causing the car to dangerously accelerate even though no one is pressing on the accelerator.

Previous studies had shown this always-on EGFRvIII growth signal causes abnormally high activation of a messenger protein, STAT3, which in turn hyper stimulates a network of genes that leads to cancerous growth of the tumor stem cells. But it wasn’t clear exactly how this protein carries out the uncontrolled cell division. Through a detailed genetic analysis of BTSCs from several glioblastoma patient samples, the team zeroed in on the oncostatin M receptor (OSMR) as a critical player. This analysis revealed that STAT3 was a natural activator of the OSMR gene and that high levels of both proteins in patient samples correlated to a poorer prognosis.

No OSMR = no tumors
To investigate further, human BTSCs genetically engineered to lack OSMR were injected under the skin of mice and showed an 80% reduction in tumor formation. Injection of similar cells directly into the brains of mice found no tumor formation when OSMR was absent. In an interview posted by Genetic Engineering News, senior author Michael Rudnicki recalled his team’s reaction to this finding:

“Being able to stop tumor formation entirely was a dramatic and stunning result. It means that this protein is a key piece of the puzzle, and could be a possible target for future treatments.”

Three proteins form a vicious cycle toward cancerous growth
Additional experiments testing the interactions between EGFRvIII, STAT3 and OSMR point out where those future treatments should act. Like the screeching audio feedback you hear when a microphone is held too close to a speaker, the team showed these three proteins create a self amplifying signal. In the tumor stem cells, EGFRvIII comes in direct physical contact with OSMR and together these two proteins act as co-receptors to activate STAT3 which, in turn, stimulates the production of OSMR which, in turn, stimulates even more STAT3 production. And so on and so on.

Co-senior author, Azad Bonni, explained how they intend to break up this vicious cycle while also acknowledging these are very early days for developing a treatment:

“The next step is to find small molecules or antibodies that can shut down the protein OSMR or stop it from interacting with EGFR. But any human treatment targeting this protein is years away.”

Watch this video to hear from the study’s first author, Arezu Jahani-Asl, now an assistant professor at McGill university: