Event showed great progress, but Japan nipping at our heals. The San Diego Union Tribune’s Brad Fikes seemed to be enjoying covering the Stem Cell Meeting on the Mesa in his own backyard in La Jolla. He stayed for the full two days of the industry Partnering Forum and when we chatted he said he had more good material than he could use. I was certainly willing to second the sentiment of the opening paragraph of the story he wrote:

“More than ever before, stem cell therapies appear poised to transform medicine — potentially curing heart disease, diabetes and paralyzing injuries, among other ailments.”

But the last portion of his piece was a little unsettling. He noted the frequent discussion at the meeting of Japan’s new fast track path for marketing stem cell therapies. The CEO of Athersys, one of the leading companies in the field, announced at the meeting that his company would be taking their lead product to Japan first for marketing, not the U.S.

Turning cell biology into a 3-D game. The ability to track cells has become one of the most important limiting factors in stem cell biology. We need to know where cells go when they are transplanted in the body, but even before that, we have found that the interaction of cells with their environment often determines if stem cell offspring do their jobs and we need to track cells to understand this. 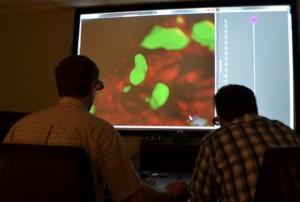 provided the field with an invaluable tool. They can label various cells with distinctive markers and follow their movements. More important they can use an elaborate software program to integrate individual slices of a tissue into a 3D sample that researchers can “tour” while wearing 3D glasses.

“It’s like Photoshop for cell biologists. The software outlines cells and blood vessels, keeping track of them as they’re dividing and moving around one another. This provides a wealth of information on the patterns of cell shape, motion and division. Visualization of the 3-D microscopy data together with the analysis results is a key step to measure and ultimately understand what drives these cells.”

Cally Templea, a leading expert from the Neural Stem Cell Institute in Rensselaer, NY, was also quoted about the power of this new tool to help stem cell biologists understand how stem cells interact with their environment:

Autism linked to stem cell burst (in mice). The accelerated brain growth seen right after birth in many people with autism spectrum disorder has been linked to a burst of nerve stem cell division triggered by inflammation. The study at the University of California, Los Angeles, could explain why inflammation during pregnancy, either due to an autoimmune reaction or an infection, has been shown to be a risk factor for the disorder.

Health Canal posted the press release from the university that quoted the senior author of a paper in the journal Stem Cell Reports, Harley Kornblum:

“We have now shown that one way maternal inflammation could result in larger brains and, ultimately, autistic behavior, is through the activation of the neural stem cells that reside in the brain of all developing and adult mammals.”

The researchers gave pregnant mice a toxin found in bacteria and discovered that it triggered an excess production of nerve stem cells in their pups. This resulted in enlarged brains and behavior associated with autism, such as a reduced interest in interacting with other mice.

Little guy regrowing his head could help us. While a few species have the ability to regrow a severed body part, the tiny Hydractinia—commonly called snail fur—out does the rest in that it can regrow its head. BBC did a nice job of describing work at the University of Galway trying to explain how it accomplishes the feat and putting the work into perspective with other recent research findings.

After harvesting the creatures off the backs of hermit crabs the Galway team isolated embryonic stem cells from them, to which they attributed the ability to regrow something as complex as a head. The snail fur may be unique in that no other adult animal is believed to harbor embryonic stem cells. The researchers hope to use the tiny creature to learn how we might be able to turn on some ancestral regenerative capacity in humans.

2 thoughts on “Stem cell stories that caught our eye: fast track marketing in Japan, a 3D cell tour and autism”