There was a time when having type 1 diabetes was equivalent to a death sentence. Now, thanks to advances in science and medicine, the disease has shifted from deadly to chronic.

But this shift, doctors argue, is not good enough. The disease still poses significant health risks, such as blindness and loss of limbs, as the patients get older. There has been a renewed effort, therefore, to develop superior therapies—and those based on stem cell technology have shown significant promise. 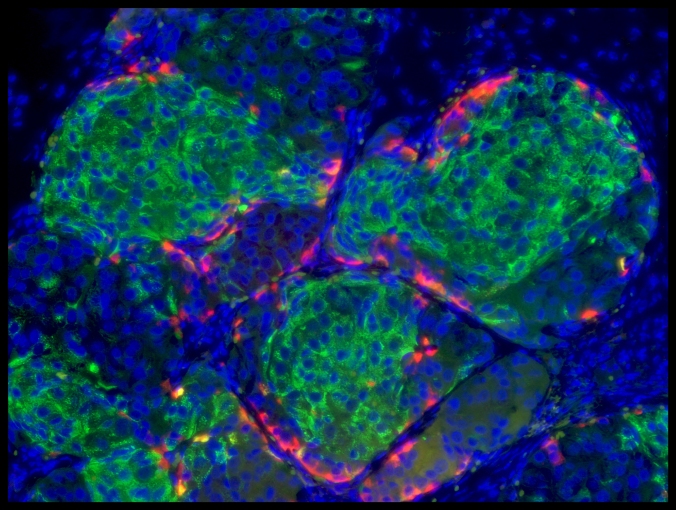 Human stem cell-derived beta cells that have formed islet like clusters in a mouse. Cells were transplanted to the kidney capsule and photo was taken two weeks later by which time the beta cells are making insulin and have cured the mouse’s diabetes. [Credit: Douglas Melton]

And now, scientists at Harvard University have announced a technique for producing mass quantities of mature beta cells from embryonic stem cells in the lab. The findings, published today in the journal Cell, offer additional hope for the millions of patients and their families looking for a better way to treat their condition.

The team’s ability to generate billions of healthy beta cells—cells within the pancreas that produce insulin in order to maintain normal glucose levels—has a particular significance to the study’s senior author and co-scientific director of the Harvard Stem Cell Institute, Dr. Doug Melton. 23 years ago, his infant son Sam was diagnosed with type 1 diabetes and since that time Melton has dedicated his career to finding better therapies for his son and the millions like him. Melton’s daughter, Emma, has also been diagnosed with the disease.

Type 1 diabetes is an autoimmune disorder in which the body’s immune system systematically targets and destroys the pancreas’ insulin-producing beta cells.

In this study, the team took human embryonic stem cells and transformed them into healthy beta cells. They then transplanted them into mice that had been modified to mimic the signs of diabetes. After closely monitoring the mice for several weeks, they found that their diabetes was essentially ‘cured.’ Said Melton:

“You never know for sure that something like this is going to work until you’ve tested it numerous ways. We’ve given these cells three separate challenges with glucose in mice and they’ve responded appropriately; that was really exciting.”

The researchers are undergoing additional pre-clinical studies in animal models, including non-human primates, with the hopes that the 150 million cells required for transplantation are also protected from the body’s immune system, and not destroyed.

“There is no question that the ability to generate glucose-responsive, human beta cells through controlled differentiation of stem cells will accelerate the development of new therapeutics. In particular, this advance opens the doors to an essentially limitless supply of tissue for diabetic patients awaiting cell therapy.”