Songbird research? How the heck could studying tweeting birds lead to advancements in human health?

At a first glance, biological research in other organisms like bacteria, yeast, flies, mice and birds can seem frivolous and a waste of taxpayer money. Yet it’s astonishing how we humans share very similar if not identical functions at a cellular level with our fellow creatures on Earth. So unraveling underlying biological processes in less complex animals is essential to better understanding human biology and to finding possible paths for treating human disease. 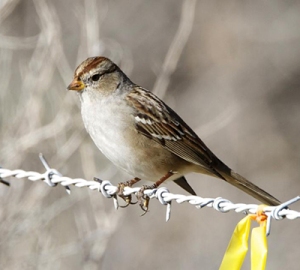 Case in point: research published in the Journal of Neuroscience last week suggests that studying brain stem cells in song birds could one day lead to methods for naturally repairing neurodegenerative disorders such as Alzheimer’s disease in humans.

The University of Washington team behind the report studies the seasonal song behavior of Gambel’s white-crown sparrows. During the spring breeding season, the population of cells in the sparrow’s brain that are responsible for singing double in number. This cell growth helps the bird to be at its peak singing performance for attracting mates and staking its territory. As breeding season recedes, these brain cells die away naturally and the sparrow’s song, no longer needed, deteriorates. When the next spring arrives the brain cells will grow again.

Audio tracings of the sparrow’s song show its degradation after breeding season each year. (image: T. Larson/Univ. of Washington)

The team’s fascinating discovery is that the dying brain cells themselves appear to provide a signal that tells brain stem cells to multiply for the next breeding season. The scientific term for the cell die-off is called programmed cell death, or apoptosis (pronounced A-POP-TOE-SIS). There are chemicals available to block apoptosis signals. And when the research team administered these anti-apoptosis chemicals at the end of the breeding season, there was a significant reduction in newly dividing brain stem cells. This result shows that new brain stem cell growth depends on the death of brain cells associated with song.

The next step in the project is to identify the signal from the dying cells that stimulates new brain stem cell growth. Once identified, that signal could be harnessed to naturally stimulate new brain stem growth to help repair the loss of brain cells seen in aging, Parkinson’s or Alzheimer’s disease.

As he mentions in a university news story, Dr. Eliot Brenowitz, the senior author of the report, is optimistic about their prospects:

One thought on “The sparrow’s dying song: a possible path toward natural, stem cell-based repair of human brain diseases”